This post was sponsored by Elmer’s. All opinions are my own.

Happy April, y’all! I’m excited to start a new series on C.R.A.F.T. around the idea of discussing big issues with kids through picture books and crafts. April is not only Earth month, but the second week in April also happens to be National Library Week. And April 30th is El día de los niños/El día de los libros or Children’d Day/ Book Day. I’m challenging Max and I to read, craft, and discuss a picture book that brings up big ideas that need to be discussed every Tuesday and Thursday in April. I’m trying my best to teach my kids to think and I want to focus on topics like diversity, empathy, and acceptance.

I found a really neat website called Teaching Children Philosophy that I am using to guide our discussion while we craft together. This website has philosophical guides for 100+ picture books for kids! It’s a great place for me to start, but I’ll likely end up using books that are not on that list too. First book we choose was The Big Orange Splot, by Daniel Manus. Max is really into “building houses”, so I wanted to start with a book and craft that I knew he would love.

Much like the kids craft book I wrote, all of the crafts in this series are going to be made with things you likely have on hand. You do not need fancy craft supplies, promise! All the good stuff is likely lurking in your pantry, bathroom, or recycle bin! 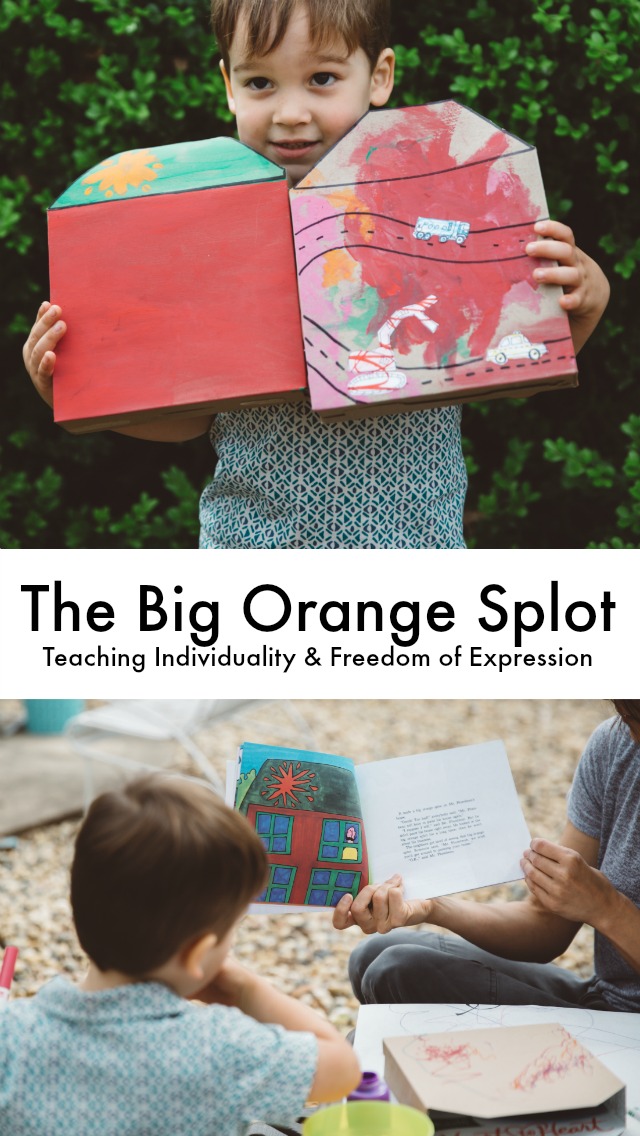 A short summary of The Big Orange Splot:

Mr. Plumbean lived on a street where all the houses looked the same, and everyone liked it that way. One day, a seagull dropped a can of orange paint on Mr. Plumbean’s house, and he decides to paint his house “that looks like all my dreams”. At first, the neighbors are upset, but one by one they talk to Mr. Plumbean who convinces them to use their imaginations to transform their houses to reflect their dreams. 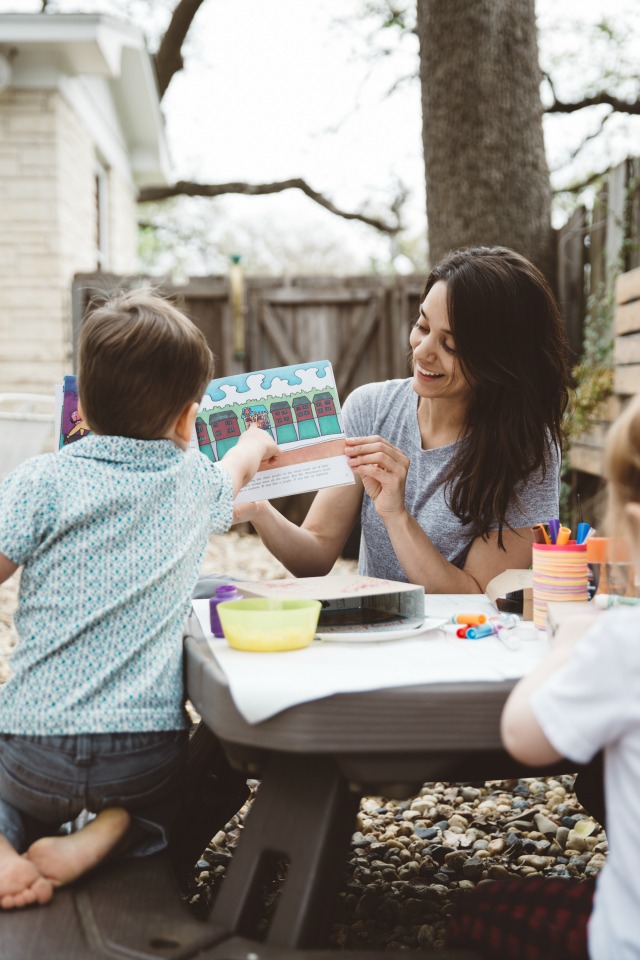 We started by reading the book a few times before bed. It seems like the more we read a book, the more he likes the book! And since, I’m trying to use this book to start a discussion, I want him to want to read it. One night after we read The Big Orange Splot, I told him I had a really good idea and that when he wakes up, we are going build a house that looks like all of your dreams! He liked that.

How to Make Cereal Box Houses: 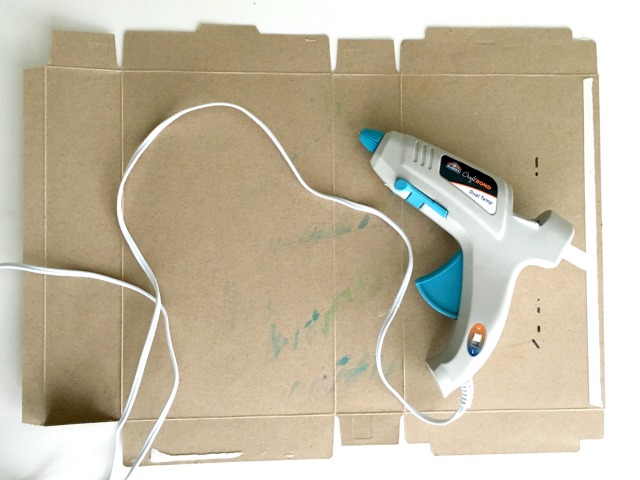 To make a cereal box house, use your finger to rip the seam of a cereal box open so that the box lays flat, like in the picture above. Next, fold the box inside out so that the brown side is on the outside. Use a glue gun to reattach the seam on the side and the bottom of the box. Now, to make the box house shaped, use scissors to cut the roof shape. Voila! Cereal box houses complete! 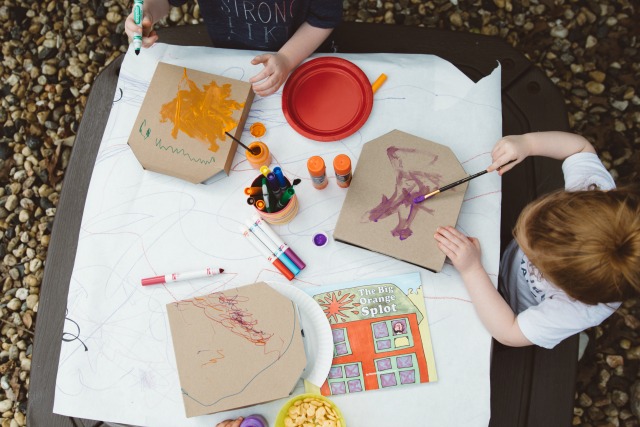 Give the kids a bunch of random craft supplies and let them build a house that looks like all their dreams. As Max and I talked about it, he told me his house needed cars and machines and a road. He specifically asked for a taxi cab, an excavator, and an 18 wheeler. We mostly used paint and markers, but for older kids it would be fun to have a few magazines available to let kids cut out objects they don’t feel comfortable drawing themselves. 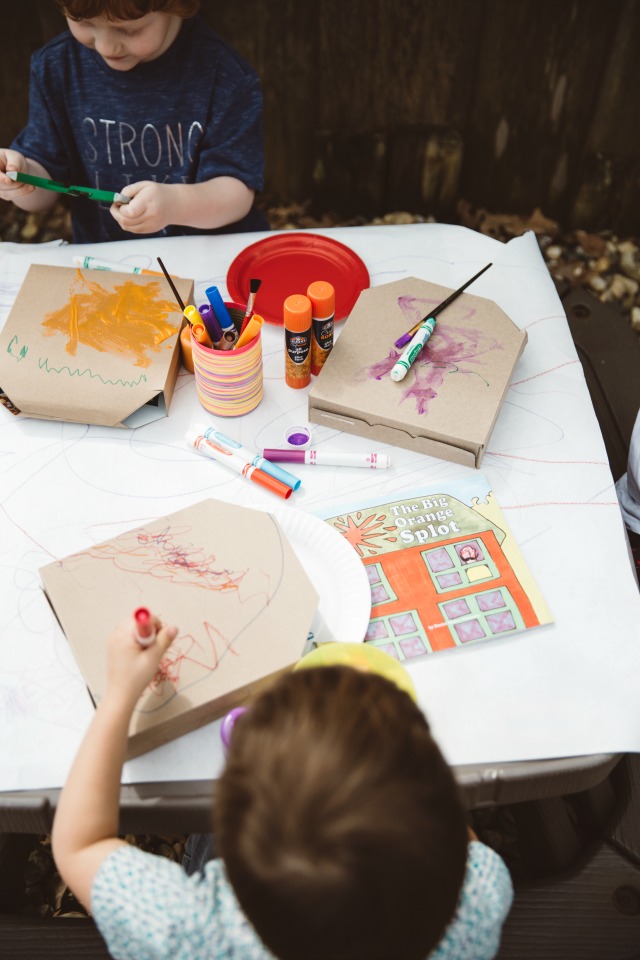 While we crafted,  I asked Maxwell simple questions to gage his understanding of the plot of the book, for example:

We talked about some of the big words and silly phrases that I knew Max didn’t understand, like carpenter (pg. 13) and “Lost his marbles”.

Then we started talking about the big issues: 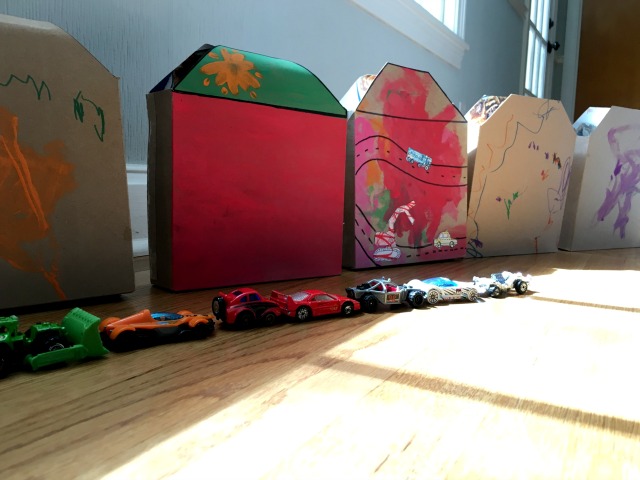 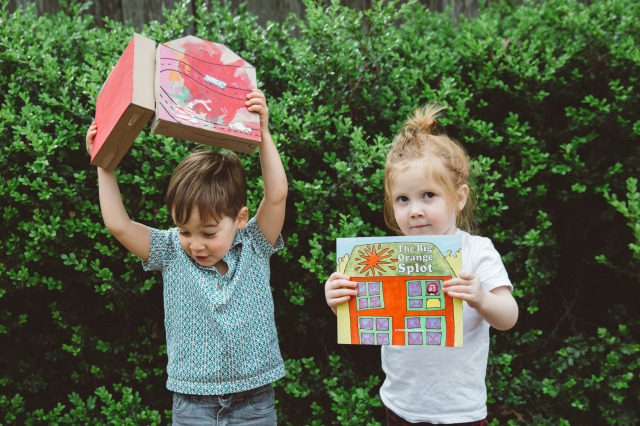 Here’s what I learned, there is no doubt he is listening and thinking about what we talk about on a daily basis. I used the first question from the guide as a jumping off point for our discussion: What do you think about the houses on Mr. Plumbean’s street changing from being all the same to being different? Max claims he likes that they are all different. He especially loves the digger (steam engine) on Mr. Plumbeans house. We talked about ways we show that we are different. For instance the clothes we wear, foods we enjoy, how Max has different colored hair, eyes, and skin than some of his classmates.

I love that the conversation we had about The Big Orange Splot opens doors to talk about different skin, hair, and eye colors we notice at the park. And how everyone looks a little different, and that makes us unique and special. have you ever read The Big Orange Splot? I’d love to hear what you and your kids thought? And a giant thank you to Elmer’s once again for supporting our picture book series and crafting!