Part 1 was all about the 2 surprise engagement parties, dress hunt #1, and the baccalaureate party.  The next phase of wedding planning begins with a 10 year anniversary trip to St. Barth’s for my childhood BFF, Tina, and her mom’s family business, NYC Elite Gymnastics. I’ve worked there every summer since it opened. I actually even named the gym. We’ve been friends since I was 8!

Let me back up a little bit, the trip had been planned for almost a year. I convinced Andy to get married on Valentine’s day. (Not because I love Valentine’s but really, just the opposite. I figured let’s give the mushy day some real love to celebrate! Anyhow, we got the actual marriage license at the court house on 2/8/2012. In Florida, you have to wait 3 whole days (or we probably would have done at the court house on 2-8-2012) until you can officially get married. Unless you go through the pre-marital class, then you can get married the same day you apply for the license. All of that said, we couldn’t legally get married until 2-11-2012. (The marriage license cost $93.50 in case your nosey, like me!) At the court house I asked if we could view the room that we would actually get married in if we decided to go that route. The lady told me how the room had just been given a makeover because of a reality tv series on court house weddings in south Florida. I googled it and could not find out anymore info, but either way the chapel was dressed up a lot fancier/cheesier than I had envisioned.

We went during Andy’s lunch break, thus his fancy attire: Inside of the court house chapel. Thus wasn’t going to work for us. When he realized I would be going away for the 10 year anniversary celebration that same weekend after Valentine’s day, Andy was a little sad, and understandably so. I mean, we get married and then 2 days later I was going to be vacationing with my friends on a beautiful island. Not exactly romantic. We ditched the Valentine’s wedding idea, and together decided on 2-22-2012. Has a nice ring, don’t you think? I got home on from St. Barth’s on Monday, February 20, and we would get married on Wednesday, 2-22!  We had a date set. Holla.

Tina and her mom are the same two I had lunch with the day I bought the first wedding dress at H&M in NYC. They weren’t impressed with dress #1. Knowing that we had 100% decided on a date, Marianne (Tina’s mom) was determined to find me a new dress. Dress #2 was the first dress I tried on in the first store we walked into. I guess it was meant to be. The dress led to getting 2 bouquets, which led to DIY photo shoot including 3 locations, which led to a bachelorette party! This was all planned while on vacation. We can’t just hang out and relax, we maniac around all the time, even on vay-cay! Naturally, the bachelorette party happened first, at a restaurant called Le Ti. We had costumes, music, laughing, and dancing. This picture collage sums up the fun and silliness we experienced… 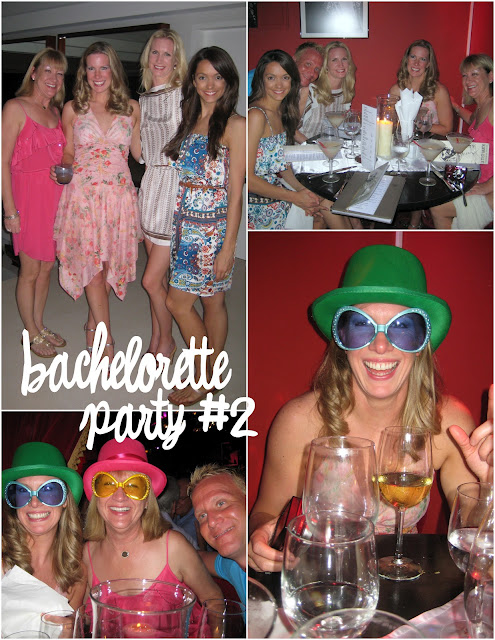 The next morning was the photo shoot. Randy, the blue eyed boy, in the picture above, was our photographer. We visited a picturesque chapel for location #1. I was expecting to be embarrassed, but I think I can speak for all of us when I say we had a blast! Everyone should have a DIY photo shoot with your friends before you get married! Best of all, we got some great pictures… One of my very favorite “wedding pictures”: We quickly got over our shyness, and moved on to an amazing beach location… 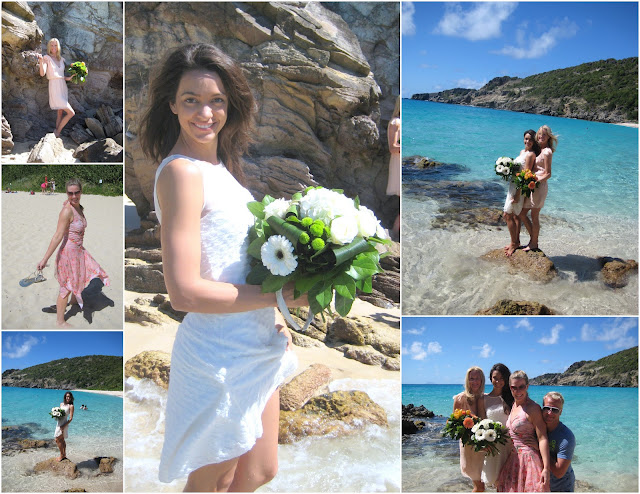 All of this was super last minute,  but I am so happy we did it! Marianne doesn’t read the blog (she doesn’t even have e-mail), but she deserves a giant thank you for insisting that we find a more suitable dress and have a photo shoot! I got home from the 10 year anniversary of NYC Elite celebration/ wedding dress shopping, photo shoot, and bachelorette party to begin the actual wedding planning!  With only 2 days left before the big day… we needed hour devours, food, decorations, and flowers, oh my!