It’s almost Halloween! What is not to love about DIY costumes, candy and pumpkins galore?! And since we bought a real house (vs our condo) in a real neighborhood this will be the first year we have tricker or treaters! I’m assuming tricker treaters end at 8p and then it’s on to costume party extravaganza, hosted by my party throwing bestie, Rachelle! After last years glow stick people mishap, I was determined to make glow stick costumes happen this year, but then I saw this awesome blog post and the rest is history. I’ve got the full tutorial for making the best DIY Bob Ross couples costumes! 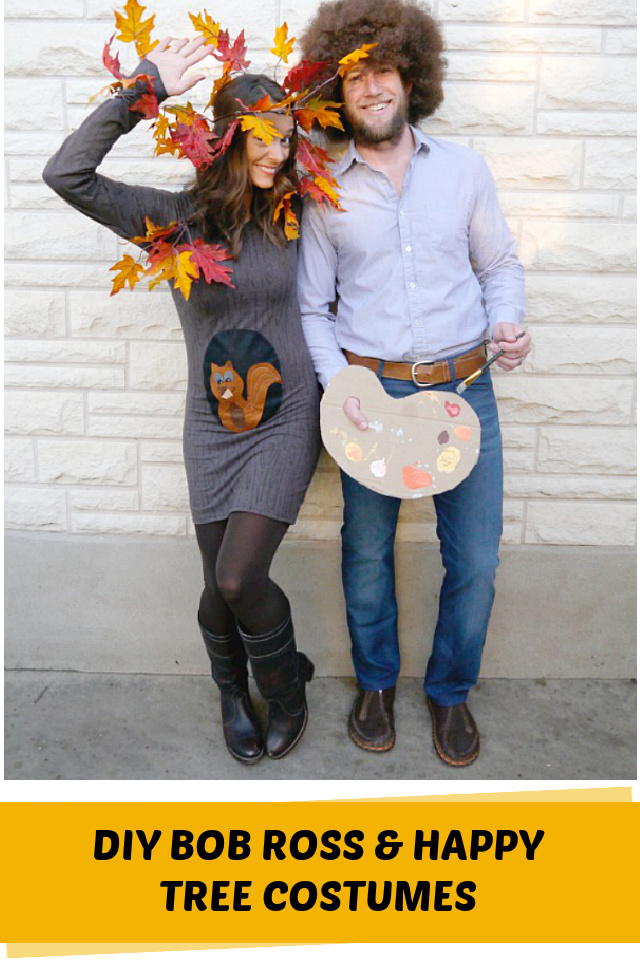 The best part of this Bob Ross couples costume is they are both pretty dang easy to make. Well, Andy’s Bob Ross costume is super easy. The only thing we had to buy was a brown afro and I made the art palate out of cardboard. Since I’m pregnant (19 weeks!), I really wanted to find a way to incorporate the bambino into our costumes. so I crafted up a baby squirrel in my happy little tree!

Here’s what you need to make Bob Ross Couples Costumes

How to make a happy tree costume

I bought those fun “tree finger gloves” from Target, but ended up taking them back and using my bare hands and painted orange nails! The gloves were awkward, and I wanted to be a fall tree not a bright green tree. I also wanted to be able to use my hands. 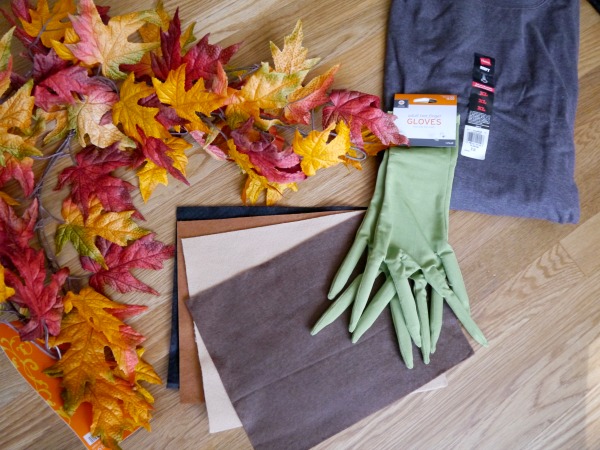 Like I said above, I’m pregnant so I’m excited to incorporate my growing belly into the costume. The squirrel is very optional part of the costume, but Bob Ross did feed a baby squirrel he named Peapod on his show. Feel free to skip to step 3 if you want to skip the squirrel. I googled “cartoon squirrel” and doodled a simple image on paper to have something to mimic in felt. I used fabric scissors and started cutting my felt pieces. 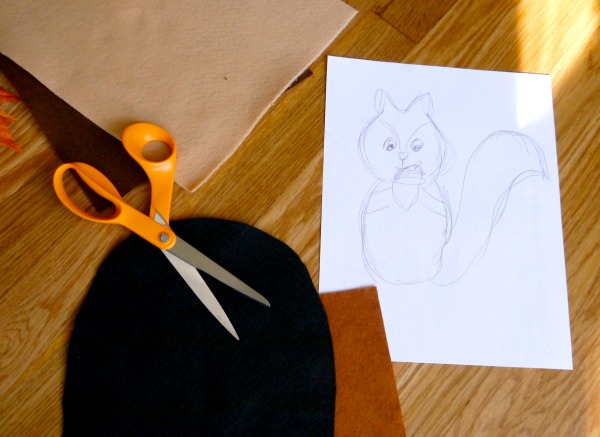 I was going to use glue to attach the squirrel to the black tree hole, but then decided to just add a few stitches. I stitched up his tail, attempted to use the fancy star stitch on my machine for eyes, and sewed around the belly circle. Oh and I attempted to use real acorns, but opted for a giant felt acorn, it was cuter! 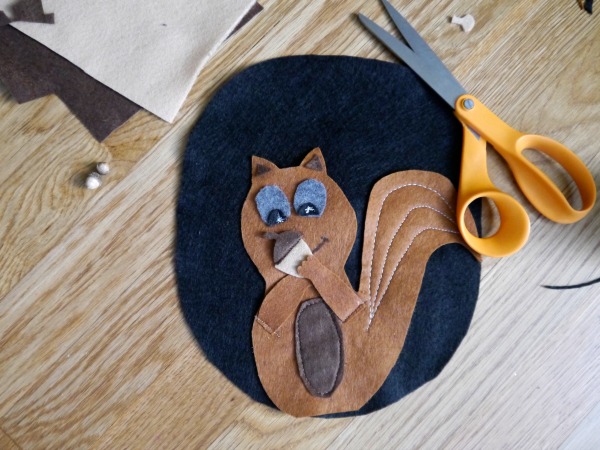 I’ve sewn a few costume  “dresses” from giant men’s t-shirts. Like my Indian and Wilma costume of Halloween pasts. I buy the largest, cheapest t-shirt I can find, and sew up the sides. Nothing fancy. I turned the shirt inside out, tried it on, and declared I needed to take in about 4 inches from both sides. I used a white pencil to give me a guide line and then I sewed it up with my machine. 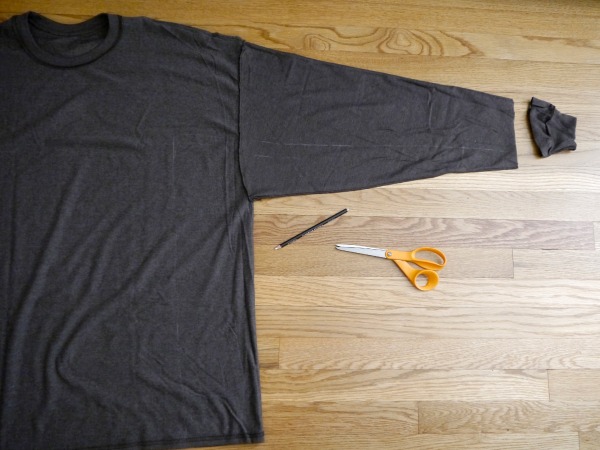 After I sewed up one side, I folded the shirt in half, and used that as a guide for the other side. This is not a perfect method, but it works! And the whole dress took me about 45 minutes to make. The arm pits were a little tricky, and they still look wonky if you look close, but who cares! I’m a happy little tree! 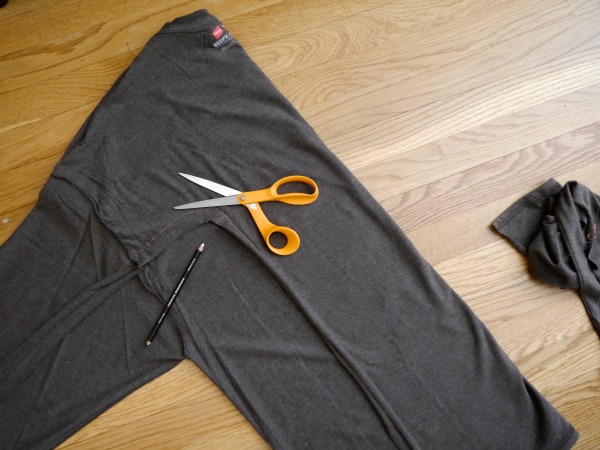 After the dress is sewn, I used a Sharpie to make bark on the brown t-shirt dress. I doodled bark all over the t-shirt, front, back, and the sleeves. 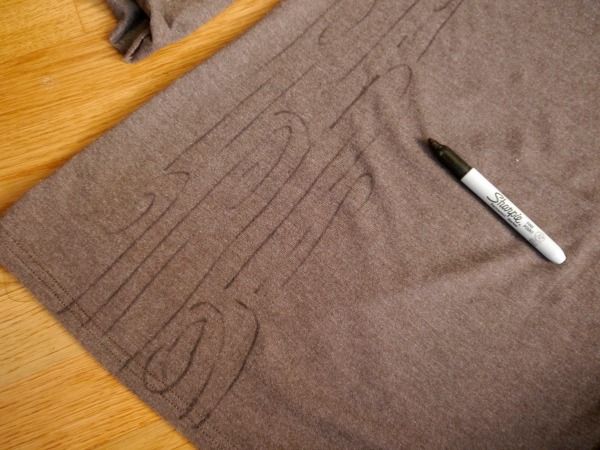 Then, I hand stitched the squirrel to the shirt. I wanted that to be easily removable in case I jut need a tree costume with no squirrel in the future. You never know, ha!

Making my branches was really easy! I bought a fall branch from a craft store and cut it into 5 separate pieces using scissors. I created a head piece, 2 bracelets, and 2 shoulder pieces and then I attached each piece with safety pins.

How to make a Bob Ross costume

Andy had most of his costume in his closet, the one thing we had to buy was a brown afro. I made him a painters pallet out of cardboard. I used a Sharpie to outline a bean shape, and cut it out with an XACTO knife. I made the paint palette out of a giant piece of cardboard I use to spray paint lots of things, so the left over paint marks worked out perfectly! 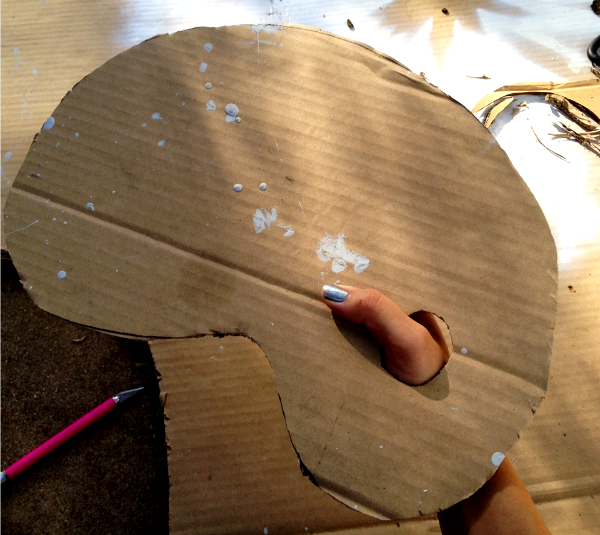 Since Bob was painting a happy little fall tree, I gave him a fall color palette. Here’s Bob in full costume. That beard came in handy! 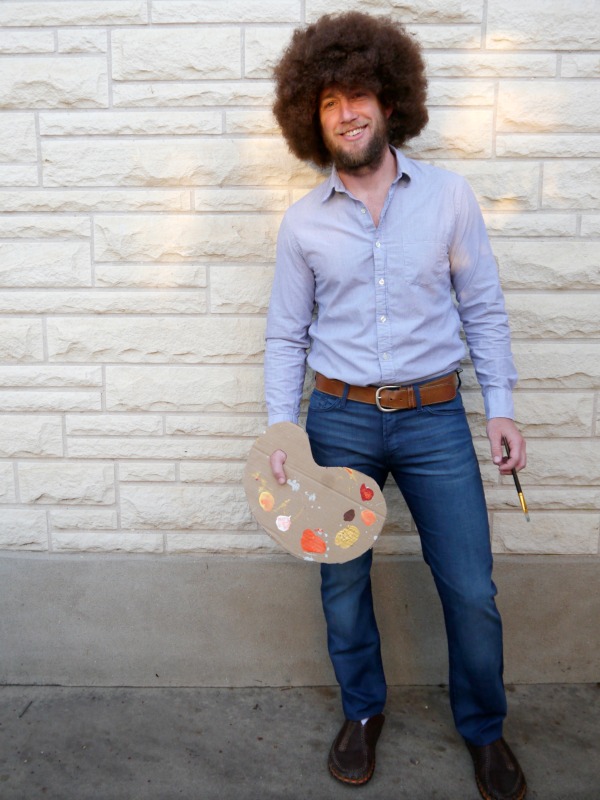 And here’s Bob painting the squirrel! I can’t believe we find out the gender of this little guy next week! 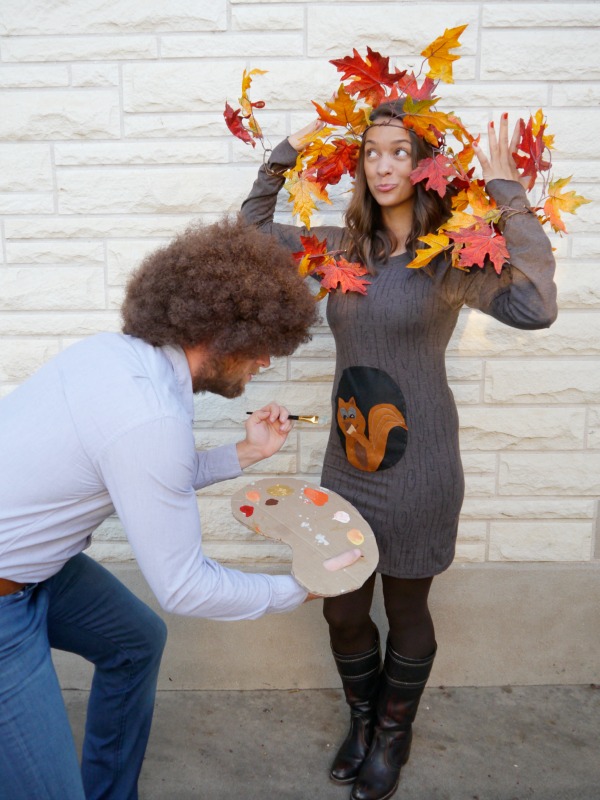 A few more fun pictures from our Halloween photo shoot we did with a tripod and camera on a timer in our backyard! Bob’s a very good painter… 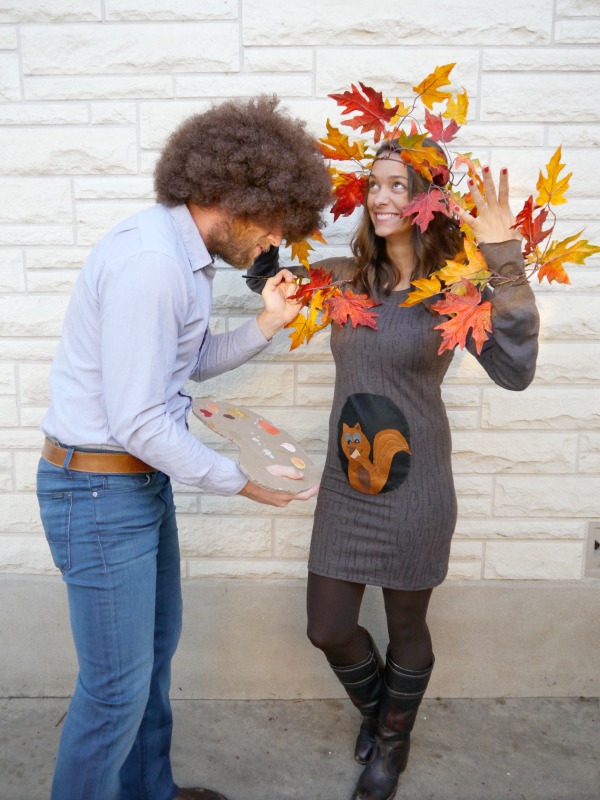 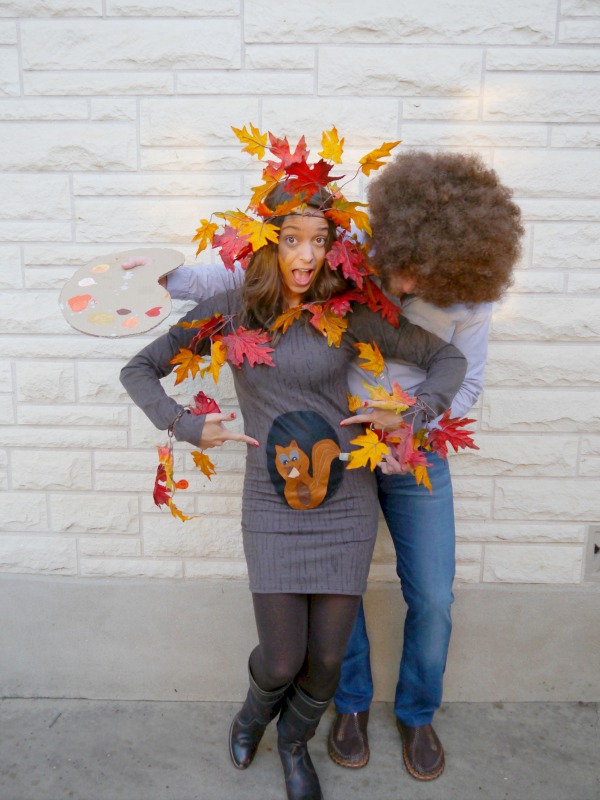 I’m 19 weeks pregnant, and I have gained 9 lbs. The bump is definitely visible to me, but to others it just looks like I ate too many tacos, ha! 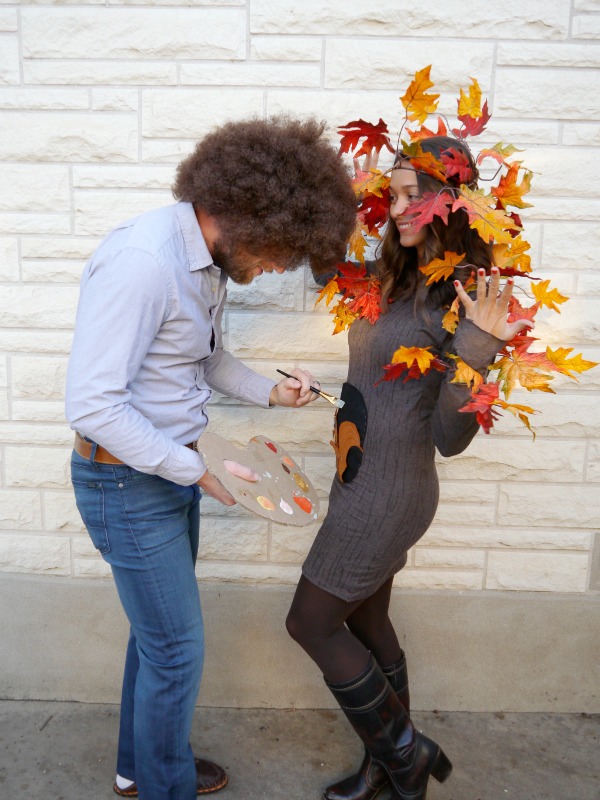 One more pic with Bob looking at the camera and me smiling nicely. 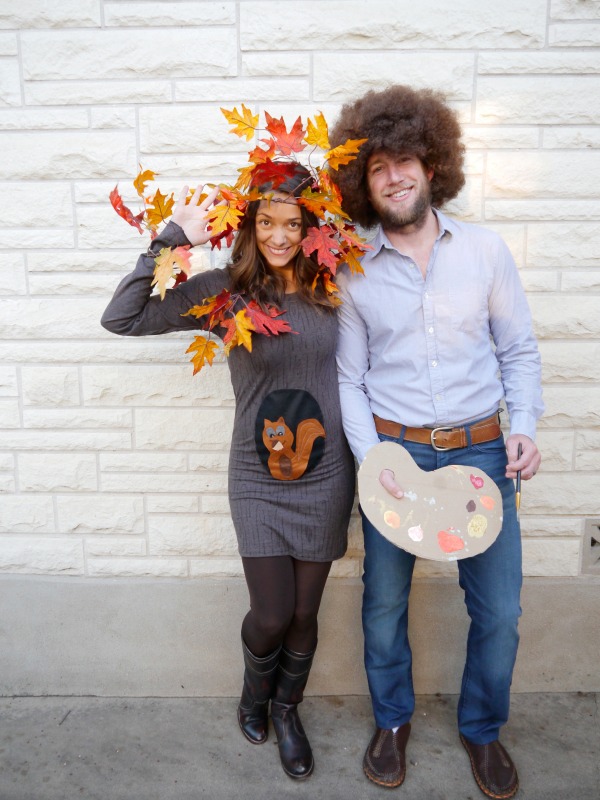 If you want more info on Bob Ross, I wrote a whole post last year, wishing Bob a happy 70th birthday (he was born on 10-29-42). There you have it, the first Dorobek family of 3 Halloween costume! Want to see our DIY Halloween costumes from years pasts?