This is my annual what we really wore on Halloween post! As a blogger, I make lots of fun costumes every year, the DIY cassette tape was my fave, but here’s the real life version of what went down on Halloween.

The kids change their minds about 26 times before trick or treating, and this year was no different. There were multiple costume ideas in the running including the DIY LEGO costumes I made for C.R.A.F.T., police man and firefighter dress up costumes, a cardboard monster, and Mila’s latest favorite, Baby Shark.

On Halloween Mila threw me a curve ball and out of the blue declared she wanted to be a “Piggie”. Max opted for the policeman from the dress up box which was his trick or treating costume last year too. Lucky for Mila, she has lots of pink clothes on hand and I whipped out an old mask from Maxwell’s party animal themed 1st birthday! I attached a pink pipe cleaner to her tutu and voila, the cutest little Piggie and policeman you’ve ever seen! 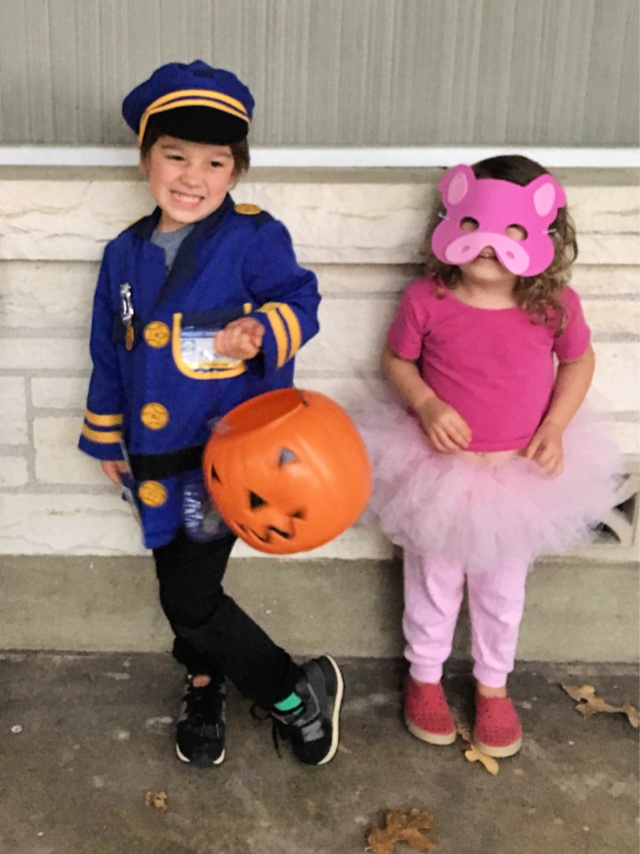 As for Andy and I, we wore our operation costume DIY  trick or treat with the kids at our neighborhood parade. Our neighborhood Halloween parade is the best! No need to even knock on doors, everyone on the 8 block stretch sets up elaborate decorations in their driveway and tiny candy enthusiasts dart from driveway to driveway. Everyone wears costumes, it’s greatness! Our friend, Rachelle, threw an awesome no kid Halloween party the Saturday before and we went as filter/ no filter costume! 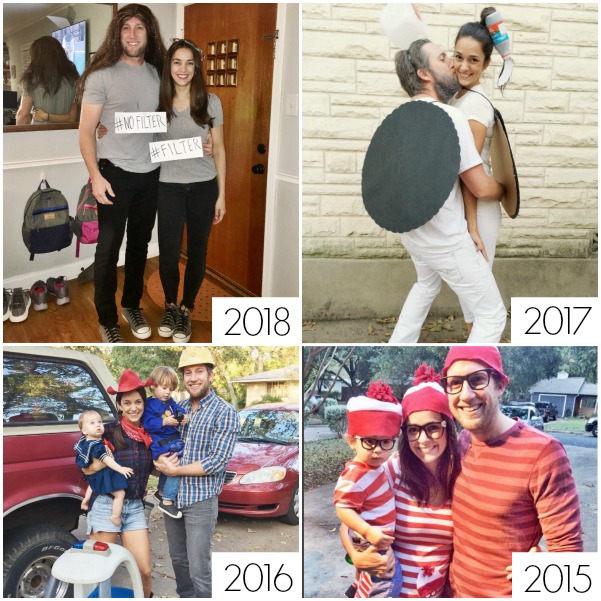 Just for fun, here’s a run down of our DIY Halloween costumes of the past: 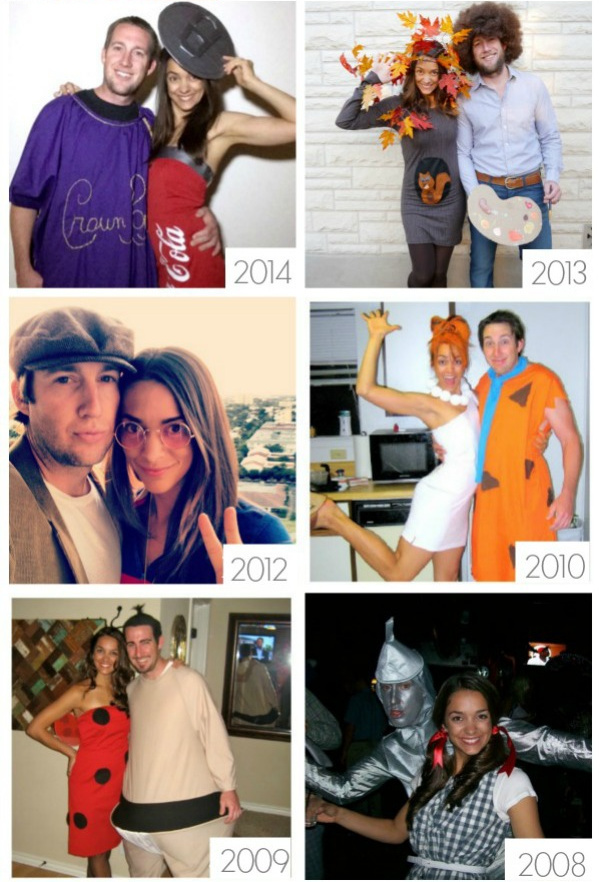 Halloween is my favorite! And I also really love the day after Halloween when I get to scroll Instagram and Facebook with DIY costume cuteness from my friends and family. I’m pretty lucky I have some uber creative people in my life!

My highschool friend, Cammy, painted her bare belly like a basketball and rocked a Sprurs t-shirt. How cute is she? I super love her tiny basketball team in matching gear supporting, Mama! Congrats on the baby girl coming soon, Cammy! 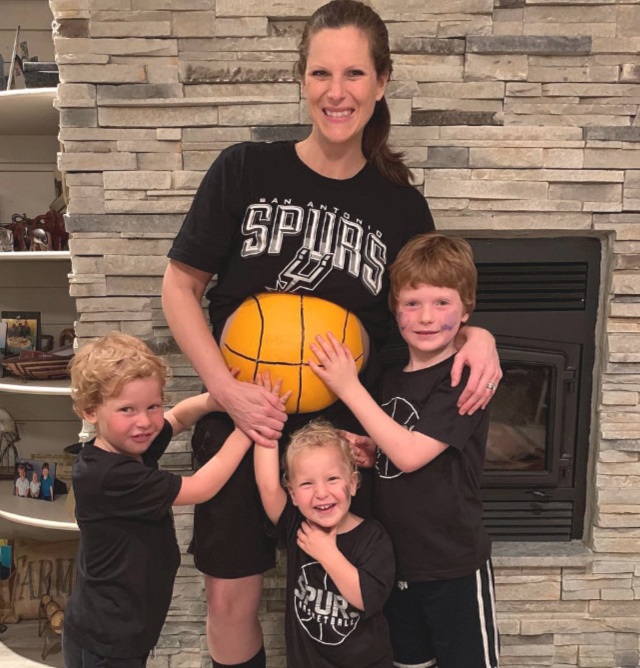 If you love all things royal, here’s the costume for you! Jessica, my childhood gymnastics teammate,  put together a Queen Elizabeth family costume that includes a a DIY telephone booth and a tiny royal guard. Jessica made the telephone booth with 4 pieces of foam board spray painted red. She hot glued the foam board together and then used a poster board for the top so that it would curve easily. For Queen Elizabeth’s costume, don’t forget the Queen’s beloved dorgis (dachshund and corgi)! 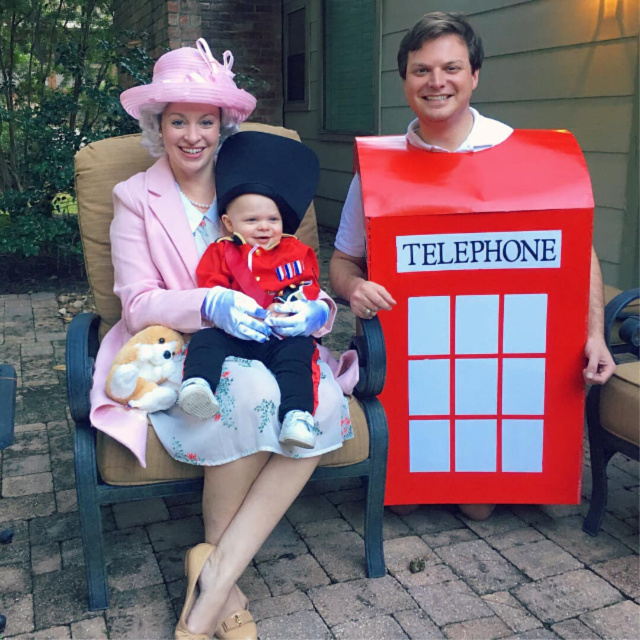 If you have a  child under the age of 10, you have almost certainly seen Moana. My friend, Stephanie’s daughter loves the movie so much they put together a Moana family costume with Moana, Maui, Te Fiti, and the cutest little DIY baby coconut pirate you’ve ever seen! To make the coconut pirate simply cut shapes out of felt and hot glue them to a brown -t-shirt! 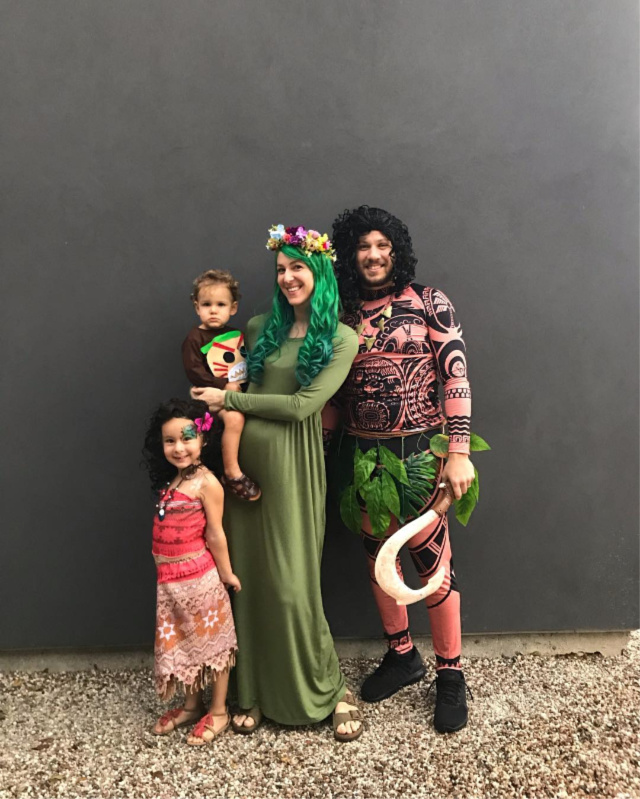 This was our 2018 costume, but 10x better! Eric and Tyler never disappoint in the costume department. In fact, number 5 on this list is also the genius craftsmanship of Eric. For 5 more versions of this easy Halloween costume for adults check out this post on Snapchat filter costumes. 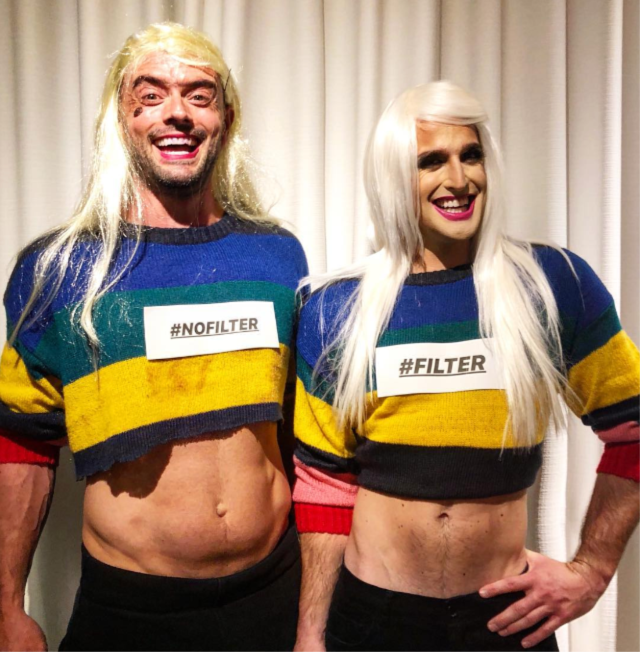 I’m obsessed with this DIY costume. Banksy’s painting, “Girl with Balloon” shredding itself moments after it sold at auction for $1.4 million! How crazy is that? This painted t-shirt costume genius was created by my friend, Eric, and worn by his friend to a fancy Halloween party in NYC! 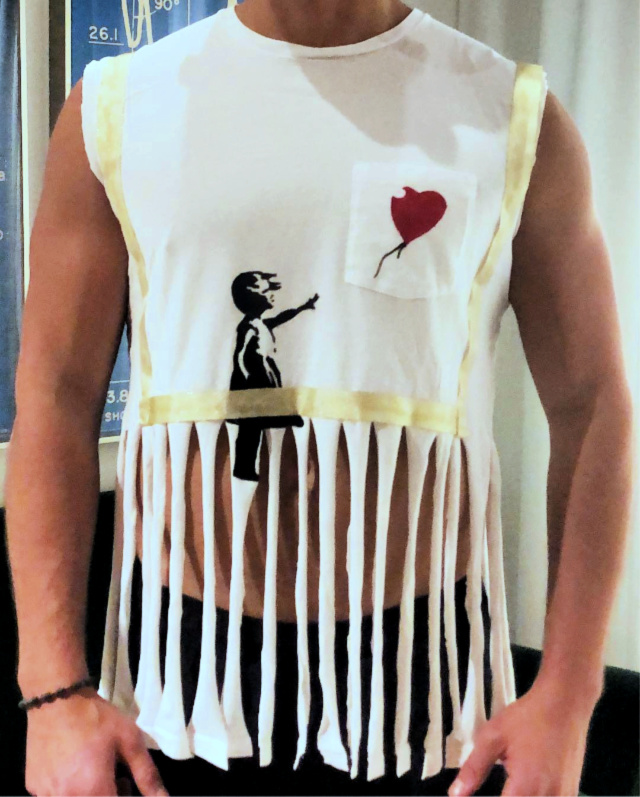 Betsy and her husband crafted up these clever tacky tourist costumes with a mix of Disney and American flag apparel. The fanny pack, card necklace, and sweat band are the perfect accessories for a last minute tourist costume! If you’re looking for more tourist costume inspiration, check this post out. 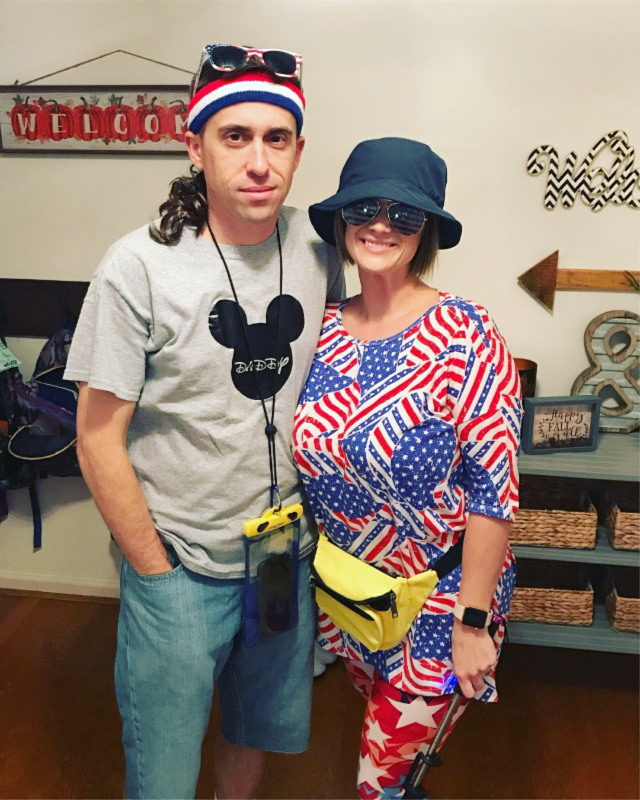 How fun is this DIY Willy Wonka group costume idea? My highschool friend, Megan is the genius behind this cuteness and shared all of the deets. Here is the low down from Megan on the Oompa Loompa costume DIY:

The Oompa Loompas are wearing leggings from Old Navy, Walmart shirts dyed with Rit dye, and suspenders from the halloween section at Walmart. I thought the adult sized suspenders would have to be altered, but once they were crossed over in the front they weren’t too long. I hot glued bias tape on the sleeves and socks to make the stripes. I also hot glued large buttons onto the clip part of the suspenders.

She used gold fabric spray paint on a onesie to make the golden ticket, but said it didn’t work as well as she hoped and would try to find a gold onesie if she had to do it again. Here’s how Megan put together the DIY Willy Wonka costume.

I found a vest and jacket at a kid’s resale store. I planned to spray the jacket purple but when I realized how much spray I would need I was really hoping to find something else. I was so excited to find that purple jacket in the women’s department at Goodwill a couple of days before Halloween! I found the hat on Amazon and his bowtie is a strip of satin fabric. 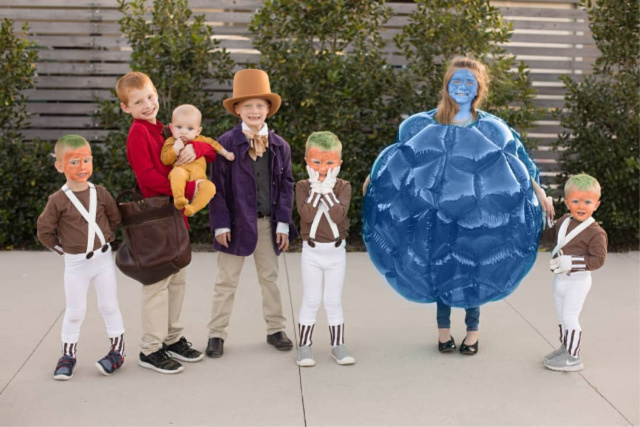 8. Snow White costume for the family

Megan is also the creator of this adorable Snow White family costume. The only costume she bought was Snow White’s dress.  Here is how she put together the costumes:

We tried to copy each dwarf’s outfit from the movie. Each dwarf wore a different color pants or tights with a different colored top. I used felt for the buttons, elbow patches, belt buckle and hats. The beards were cut out of faux fur fabric and attached with elastic. The pickaxes are made out of wooden dowels and cardboard. The prince’s top is a blue art smock I borrowed from my sister’s classroom. I added yellow duct tape for the buttons and trim. We also added shiny gold tissue paper crumbled up in the wheelbarrow for the dwarfs. 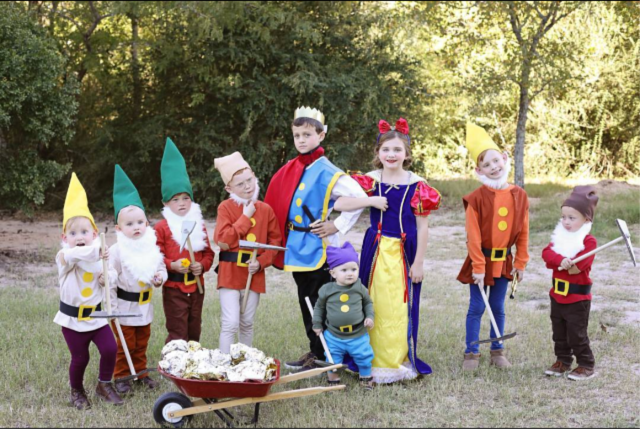 Megan did it again with a Wizard of Oz theme group costume for her littles! These costumes are a mix of bought/ thrifted items and things she had on hand. 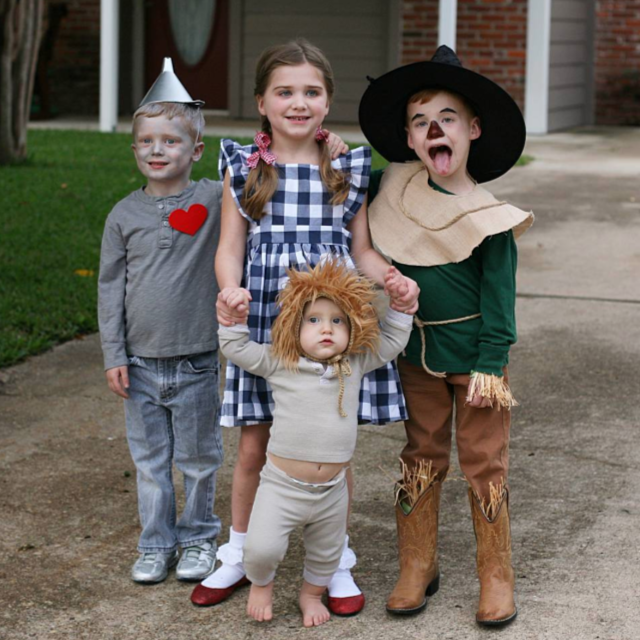 Veronica made this group Tetris costume with her co-workers. Veronica says, “We spent $40 in square boxes, lots of paint and many hours of time to build it. So I don’t want to throw it away.” If you live in Austin, she is willing to give it away to another group to enjoy this creative costume next year! Her daughter, Andrea, took these adorable pictures. 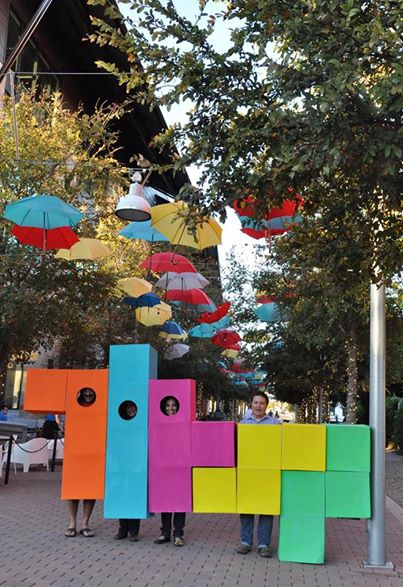 If you want to see more DIY costume greatness from my creative friends, check out these posts from Halloween’s past: