Halloween with a toddler is the best thing ever! (I wrote the same thing in last years Halloween post, ha!) I dare to say Max liked it even more this year! After every candy stop he exclaimed, “Let’s go find some more!” Max participated in a few Halloween events this year, but the highlight was absolutely trick or treating on Halloween night. We went to a Halloween parade in our neighborhood. Parade is a loose word for tons of costumed kids and parents trick or treating on the same windy street. The home owners set up spooky/ fun candy stations on their curbs or doorsteps. The kids dart from one candy pit stop to the next. Some people go all out. Y’all, I’m talking kegs set up in the grass handing out beers to parents, all out! 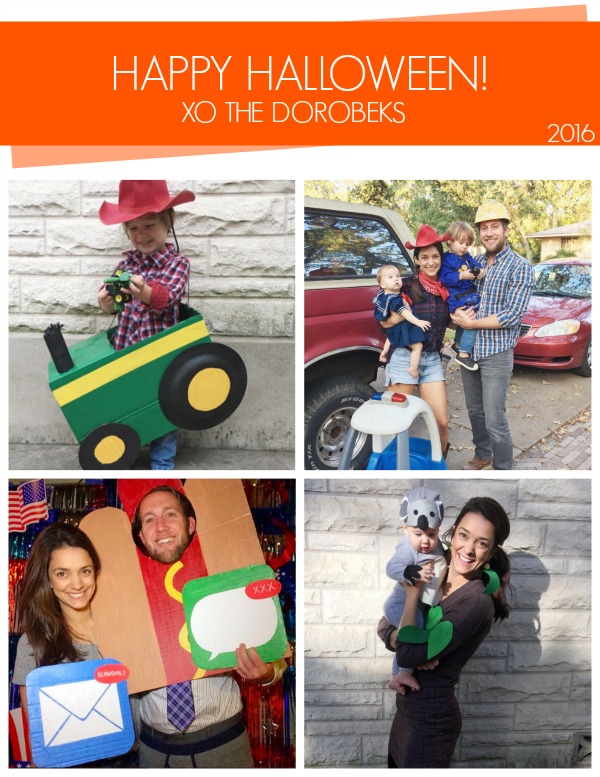 (Psst… There are a few Amazon affiliate links below.)

Just for fun, here’s a run down of Halloween’s past:

Let’s talk Halloween festivities. Maxwell had a fall fest at school earlier this week. He was supposed to dress up like someone or something on a farm. He declared he wanted to be a bulldozer. I talked him into a tractor for the sake of my sanity. Cowboy attire is simple, and I whipped up an easy tractor made out of a diaper box. He loved his tractor, but it’s hard to walk in a box. So, after the fall festival I knew the tractor wasn’t going to be a trick or treat winner.

We got a free police car cozy coupe from the neighbors awhile back, and I thought that might be a fun way to trick or treat since he loves riding it in the backyard. I put together a basic police man outfit with stuff from his closet and then found this awesome Melissa and Doug police officer role play costume at Marshall’s. I splurged on the $20 costume thinking it would be a fun addition to the dress up clothes after Halloween. Y’all. The walkie talkie that came with the costume was worth the $20 bucks. He loves that thing.

I’m trying to go in order here, but the walkie talkies are getting me off track. After the fall fest, we went to a play date in the park with a bunch of friends. Maxwell ended up wearing his police man costume and this is where Mila and I wore our koala bear and tree costume! Andy went in street clothes. #Boring I was excited about being a tree with my sweet little koala bear. These were both old, up-cycled costumes. I made Max a DIY baby koala bear costume many moons ago. And my tree was a reconfigured version of the tree I used when Andy and I were Bob Ross and Happy Tree. 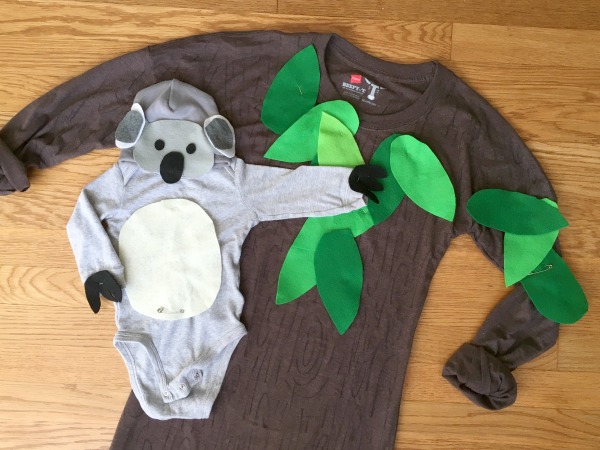 When I make Halloween costumes, I try to make them as versatile as possible. Basically, I try not to hot glue things to cloth if a safety pin will suffice. Or if I can use sticker letters, I do that. (Like with my Coke dress!) Or sometimes I even pathetically hand stitch things on knowing that I could always cut it off later. So, for this years tree, I just cut out felt leaves and safety pinned them to my already made Sharpie drawn brown, bark covered dress. Easy frekain’ peasy. Oh and last minute, I whipped up some leaf earrings with a random pair of earrings and glue dots. You can see them in action below. 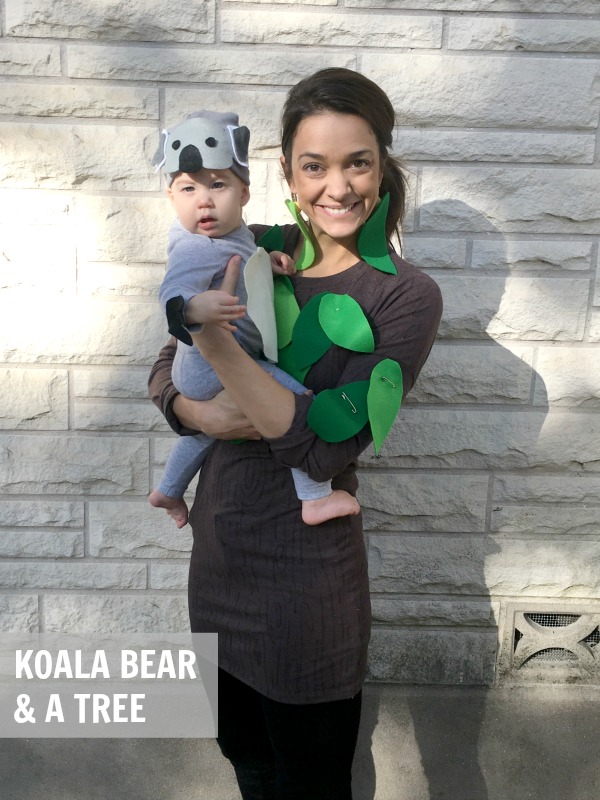 The next Halloween event was an election inspired Halloween mash up party for adults only. We couldn’t decide what to do for that, and buying costumes was going to be tricky since we were trying to make these in ultimate procrastination style the night before. I was on the phone with a friend and she suggested dressing Andy up as a hot dog and giving him an Anthony name tag. Dome and done! (Thank you, Tina!) I’m going to go into more details about how to make a cardboard hot dog and giant email and text icons in another post. You never know when you might need a last minute extra large text icon. Oh wait, that’s just me? Any who, here we are as Anthony Weiner and the Email/Text Scandal of 2016! Yes, Andy is wearing undies over his suit pants. 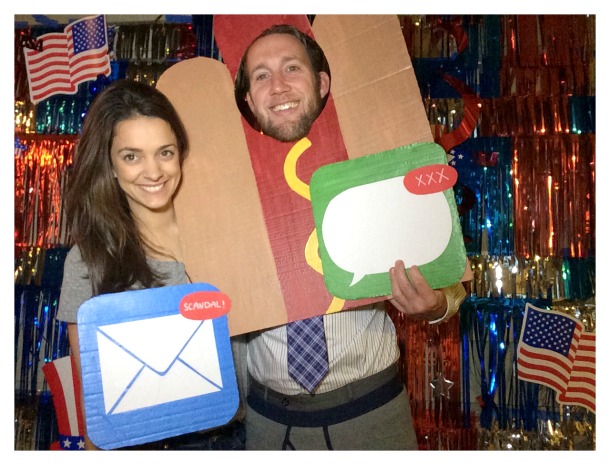 For Monday night’s trick or treat shenanigans, I really wanted a little family costume action. So, we (and by we, I really mean me!) raided our closets and came up with the Village People! (This was also inspired by a friend. Thanks, Ashlee!) The Village People costume could be way cuter if you actually had 6 people to dress up and all the right accessories. It would also be helpful if your people would assist you in the YMCA for a picture. But, for a last minute, minimal effort attempt at a family costume, I’d say it was a win! Mila’s sailor dress is my old baby dress, so that make me extra love her outfit. The cowboy and construction worker could use a little more help, but E for effort! 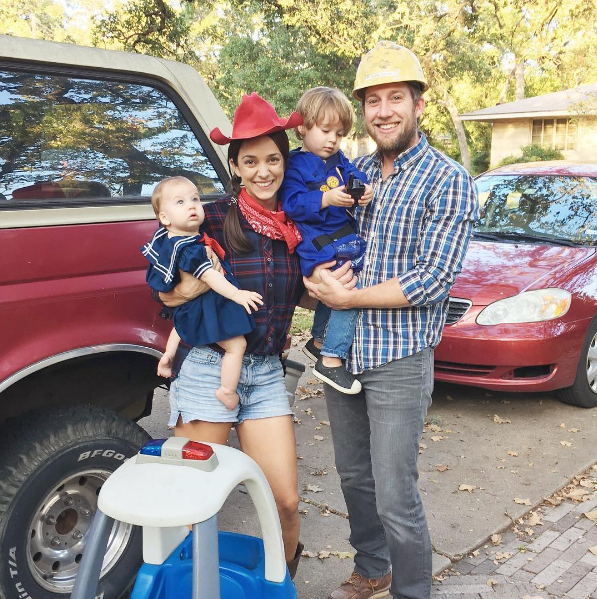 For the record, I do not recommend brining a cozy coupe car trick or treating. We ended up brining it back home about 4 minutes later. Max wanted to run! Which meant one of us was stuck pushing the police car and the stroller. Only 364 more days until Halloween!
« Healthy Halloween Snack
My Favorite Things Giveaway! »