I showed you some of the fun stuff yesterday, but today I’m giving you the deets. The little man shower decor, for the most part, was done all in one day. Marnie was the proactive hostess (there were 5 of us!) who whipped up some crafty goodness in advance including: mustache & bow ties on sticks, cupcake stand, silverware holders, mustache plates and cups and she brought scrapbook paper, and twine to the baby shower eve craft night. We couldn’t have pulled it off without her decor fore thought. My mom was also essential in operation little man shower decorations. Thankfully, my mom is use to my extra messy crafting style and her house is always fully stocked with craft essentials.  She is also a super star at resurrecting my craft disasters and assisting to make my visions turn into reality. Annie (the guest of honor) was another major player in her own shower decor! Lucky for us, not only is she good at putting together fancy fiestas… she loves it!! The mad lib gust book (more on that Friday) was the one completed craft I had with me when I arrived in TX. Oh… and I had e-mailed the mom’s about the “Who did it?” game. But, other than that the shower was all just a vision in my head upon deplaning in TX on Friday morning.  Saturday was the shower. Ah! 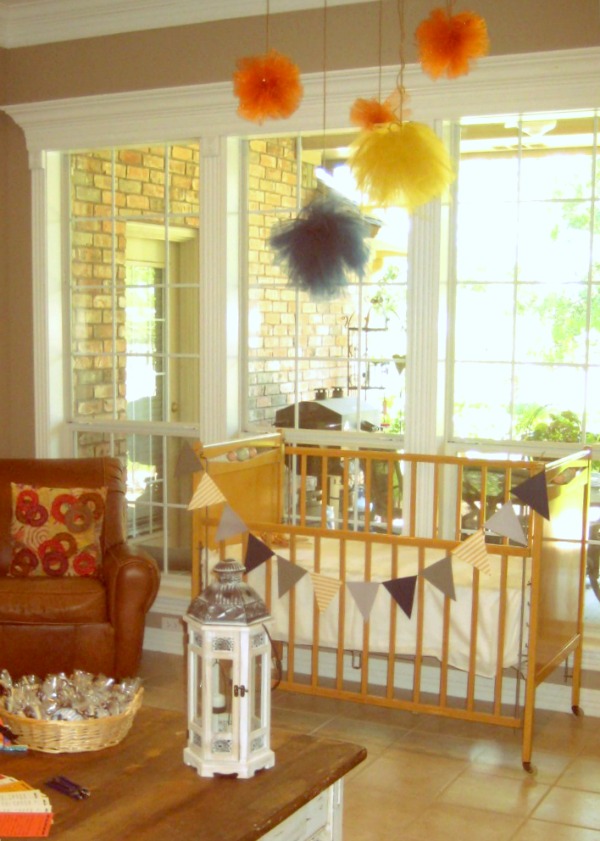 The whole traveling from Florida to Texas thing made shower decor pretty tricky. Not to mention, I had never been in the house where the shower was planned. On the plane, I made a list of all my ideas. Check it out: I had ideas, it was implementation and transportation that was tricky. Somehow, we actually pulled off about 80% of the list! Here’s how it went down. My mom and I started making recycled garland early on Friday morning… I knew we could find a place to hang it up. Annie took off of work, and the 3 of us went to tour the shower house that afternoon.  Annie had a basic idea for party layout already in her head… food, drinks, gifts, photo booth.  We just needed to decide how to jazz up the already pretty space  in little man fashion. Here was the refined to do list after the initial house viewing on Friday afternoon:

My mom and I had started the recycled pom pom garlands. We attempted the crepe paper tying technique I’d seen on pinterst. Sadly, it didn’t work out as well for use, and time wasn’t on our side. We tried 2 techniques: dipping crepe paper in blue food coloring and using a spray bottle filled with watered down acrylic paint. As you can see neither worked out to well for us… We ended up opting for a version that included things from around the house and no drying time. We used brown paper bags, crepe paper, blue string, and orange fabric to create a lovely bundle of texture and color… 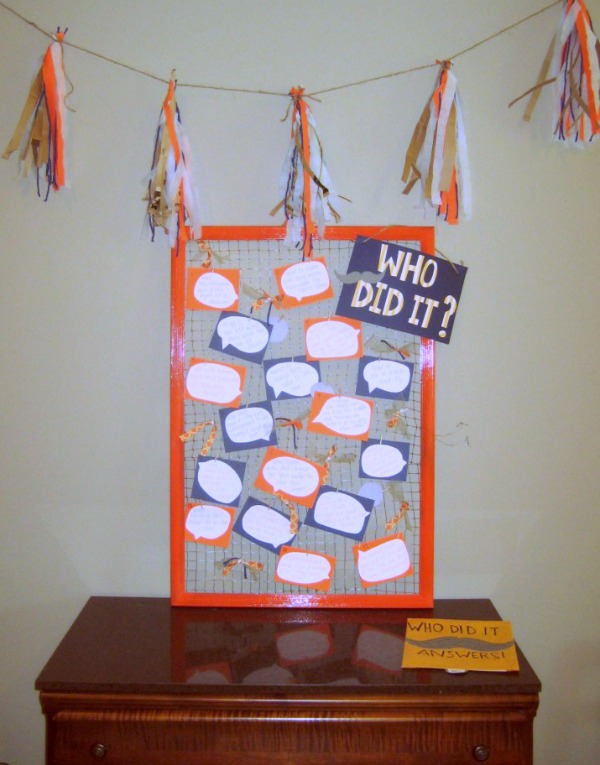 Next up was tulle pom pom’s. We speeded to Hobby Lobby (something we don’t have in South Florida!!) for tulle ball materials. We wanted to make 5 balls of different sizes for above the crib of gifts. None of us had ever made large tulle balls, and had no idea how much tulle to buy. We opted for 4 yards of mustard and navy and 2 rolls of the sparkly orange. (I didn’t even realize tulle cam in rolls!) Just an FYI, if you have time order from Amazon, it’s cheaper. (here is an orange tulle roll

for $2.98, but I can’t see how many feet is on one roll and here is another orange tulle roll

for $3.59 with 75 feet of tulle).  The mustard and navy had to be cut into strips, while the orange was already the right width on the roll. Another thing about the tulle on the rolls is that it was stiffer than the tulle bought by the yard… this made for fuller pom poms. For the small orange balls, Annie cut out circles from old cardboard. I’d guess our circles were 12 in. in diameter. For the really big tulle pom pom’s we went crazy and free formed them. We cut the tulle by the yard into 6 in strips, and alternated it back and forth on top of itself. Then just tied the giant bunch of tulle in the middle with twine. 4 yards was not enough if you want super fluffy tulle balls. I’d say at least 8 yards cut into 6 in strips for 24 inch tulle balls. We didn’t have time on our side, and decided since the tulle balls were being hung up high, you wouldn’t notice if the not so fluffy tops. It was festive and certainly added a splash of color and a focal point for the party room! See for yourself: 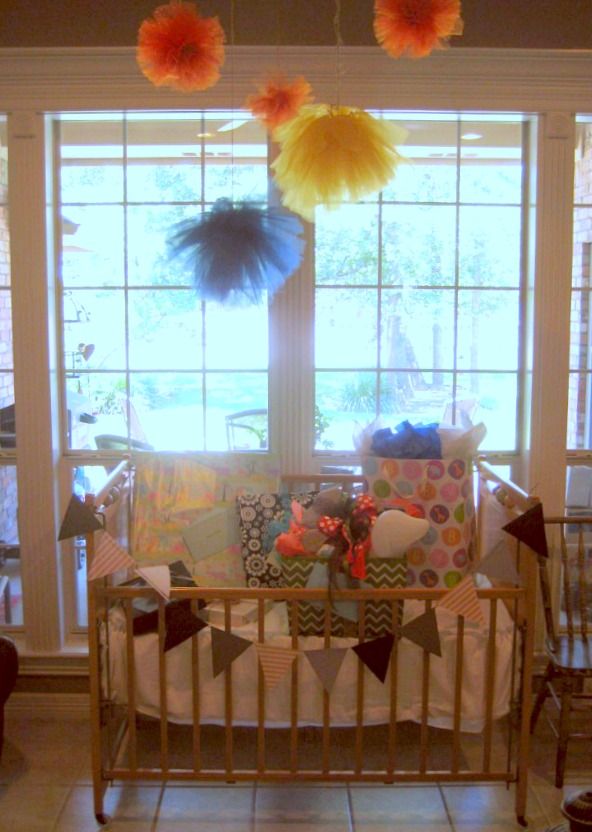 The scrapbook bunting was a Sabrina/ Jamie/ Marnie project at operation little man craft night. Marnie brought all of the coordinating scrapbook over, I cut out all of the triangles, and Sabrina taped and arranged the bunting on the twine! I love it on the crib… arranging was a group effort. Moving on to food and drink labels… Annie made the food labels on the computer with her scrapbook software and printed them out on card stock. The hardest part about this project was defining the menu… ha! Vikki, Marnie, and Sabrina were the menu makers, chefs, and bakers! I contributed one (super duper simple) food item (to be seen shortly).

Each label was printed on card stock with a fun border, I added a few scraps and a felt mustache, and Annie glittered some clothes pins… pretty simple, but definitely added a little pa-zazz… How fun is this watermelon baby carriage for make your own fruit kebabs! Here is my one food contribution… individual veggie dip cups… I first saw the idea here… it’s perfect for a party because you can pick one up and eat ’em with your fingers. These were the super cute edible party favors baked by Steffany Bowling with Peace, love & Cakes… Vanessa was in charge of  “wettin’ your whiskers”… we had lots of alcoholic and non alcoholic options available… The cups even had cute little mustache stickers! The mimosa bar complete with strawberries, raspberries, and 4 juice options was a tasty option for the non pregnant people in the room… (I need to add mimosa bar to the list of 16 party bars!) Have you ever hosted an event while living in another state? It’s a tricky/ pseudo frustrating venture. There are all these things you want to bring/ do but the suitcase can only hold so much.  More little man activity deets on Friday… 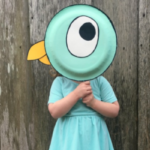