I hope everyone had a very Happy Halloween! Trick or treating is the best and DIY costumes are my favorite. Needless to say, this is my favorite post to write all year. I give you the best DIY Halloween costumes, 2019 edition!

I wish I had some costume cuteness to share with y’all from casa de Dorobek, but this year we went rouge and I let the kids make the plans for the Halloween parade. Andy wore an old wig from the Bob Ross costume a few years ago and I threw on the Operation Game costume I made last year. I didn’t even take one family picture amongst the chaos of hosting dinner and trick or treating!

As for Maxwell, he told me for a week straight he wanted to be a golden, super hammer. We made this hammer costume together and last minute he declared he wanted to be a policeman. The same policeman costume he wore trick or treating the last 2 years. I told him as long as he took one picture wearing the golden hammer, I don’t care what happens after that! 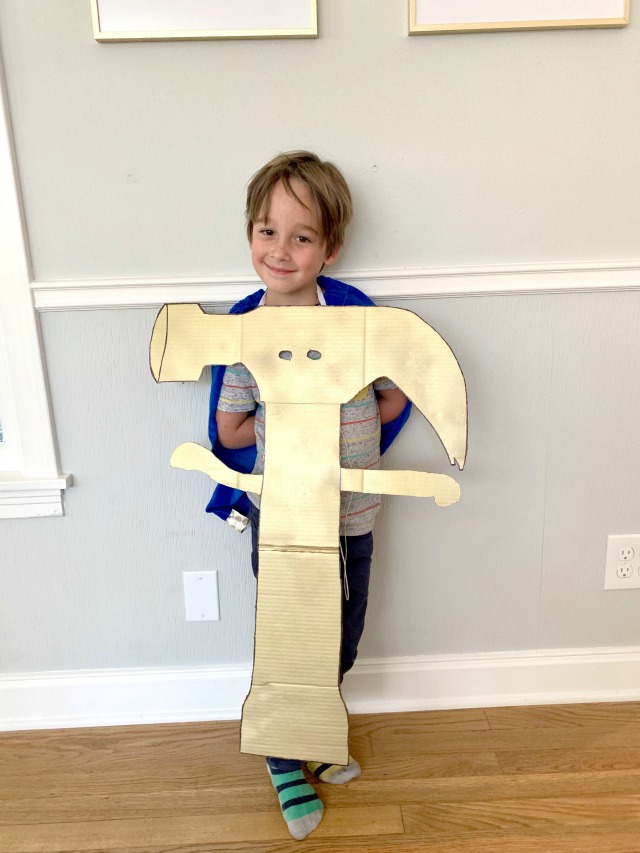 As for 3 year old Mila, she had so many fun costume ideas including a DIY flower costume and a DIY flamingo. Last minute, she fell in love with this store bought unicorn cape and I gave in and bought the 15 dollar frock. I know this will get lots of love in the dress up closet. Maxwell was a super star policeman complete with a cape and glasses and Mila was a store bought unicorn. I think they’re the cutest even if they did change their minds 9 times before Halloween and insist we make multiple DIY costumes. 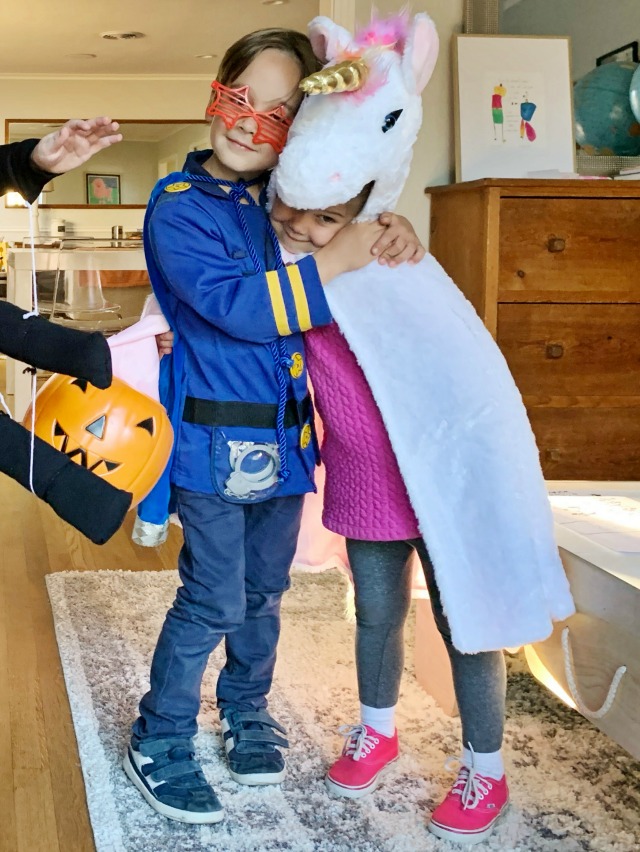 The Best DIY Halloween Costumes of 2019

Our neighborhood goes all out for Halloween, so many of these costumes are from our local parade and many more are from my creative friends and family all across the country.

Tired mom costume was put together by a C.R.A.F.T. reader, Miranda. Best part? You likely have everything you need for this costume in your closet right now! I have an inkling you can do a little digging in the trash to find an old Starbucks cup too. 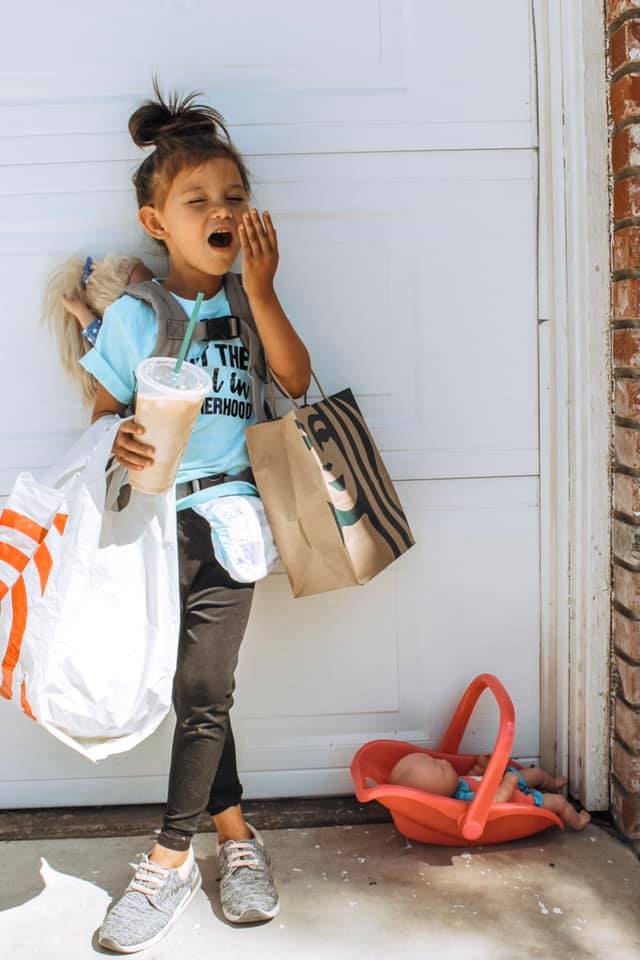 My high school friend, Kim, turned her adorable son into Doug from the beloved 90’s cartoon on Nickelodeon. Side note: Can you believe that Doug premiered 28 years ago in 1991? 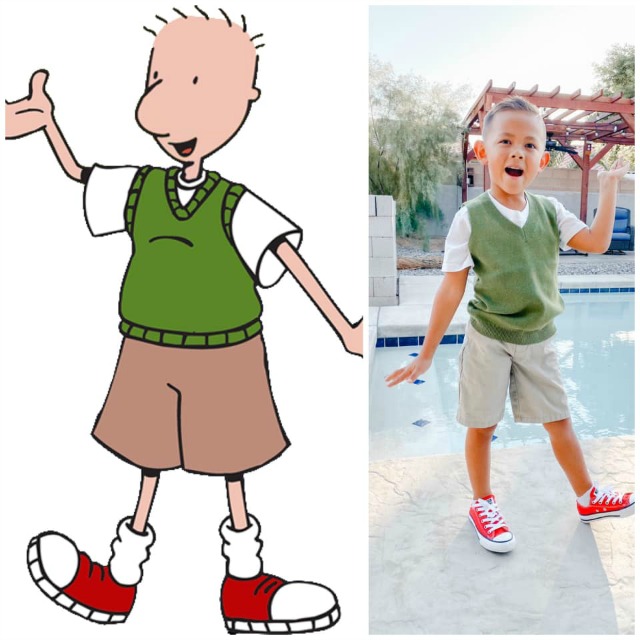 I couldn’t love this Dwight costume more! My friend, Katie, of Sweet Rose Studio, turned her son into the best Dwight I’ve ever seen. All you need is a yellow button down shirt, striped tie, slacks, glasses, and you must part your hair down the middle! 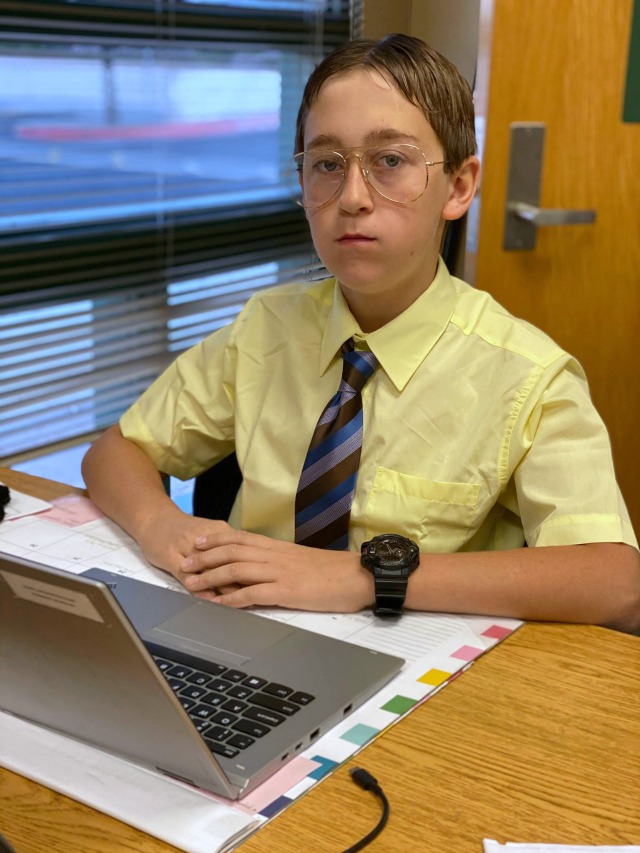 My friend, Orquidea’s son whipped up this brilliant, last minute “VSCO girl” costume. What is a VSCO girl is a totally fair question. VSCO is a photo editing app that allows the user to edit pictures from a cell phone, add filters, and upload the VSCO community or other social media sites. VSCO stands for Visual Supply Company. A “VSCO girl” is a person obsessed with the app. According to Dictionary.com, a VSCO girl typically wears scrunchies, the color yellow, friendship bracelets, high-waisted jean shorts, baggy tie-dye tops, and Birkenstock sandals. A VSCO girl is also a lifestyle and includes health fads, using eco-friendly products, drinking out of Hydro Flask water canisters, and using disposable cameras. 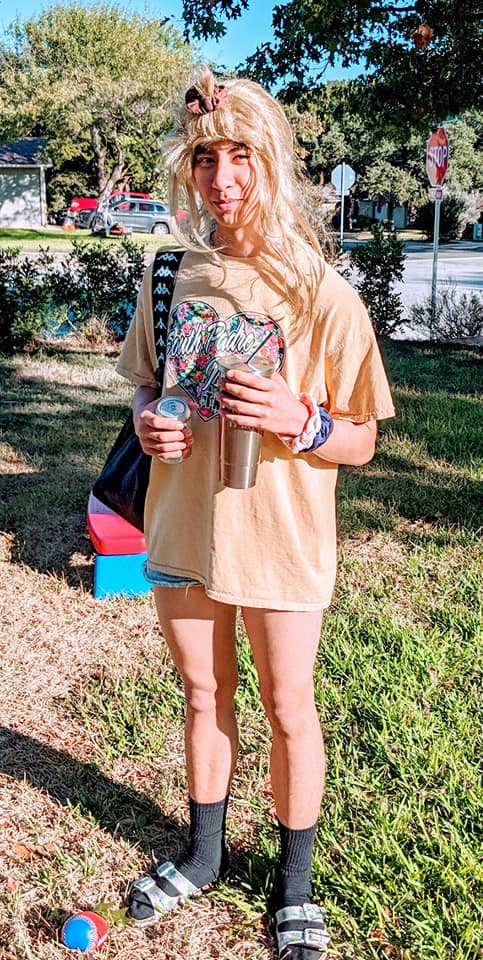 Ashley put together this adorable Ms. Frizzle costume and Liz costume duo. Both costumes are store bought, but she made the Magic School Bus out of cardboard and paint and attached it to a wagon. It’s the perfect trick or treat mobile for Liz and Ms. Frizzle! 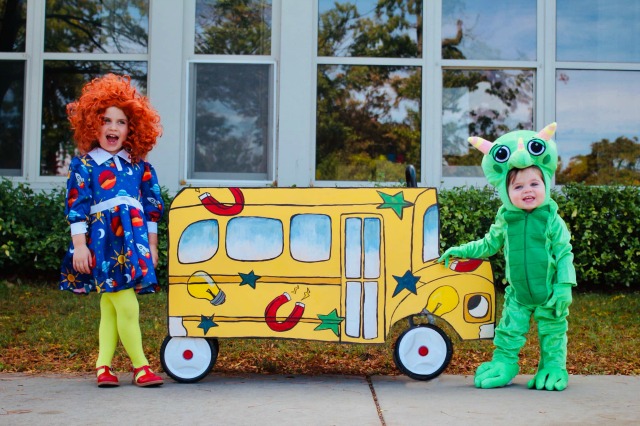 The same genius mama that put together the Tired Mom costume, crafted up this greatness. It’s Regina from Mean Girls at the prom. 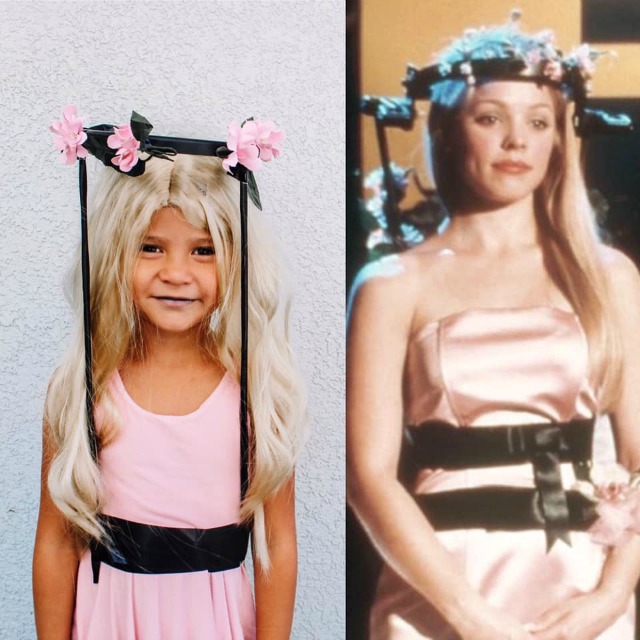 Miranda also put together this MAC beauty counter costume for little one. What a great idea for a last minute costume! 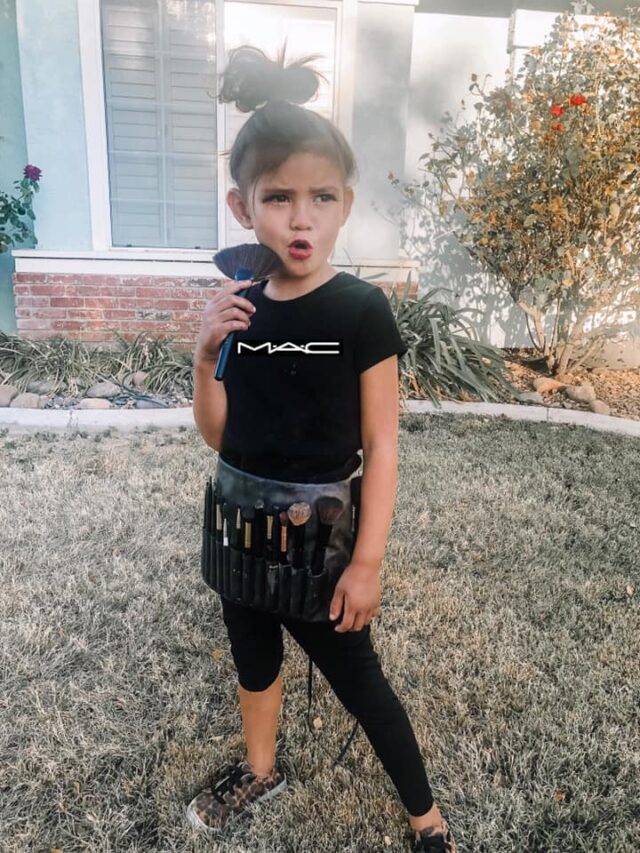 Hollie turned her toddler into the cutest Colonel Sanders you’ve ever seen complete with an extra large bucket of fried chicken from Kentucky Fried Chicken. 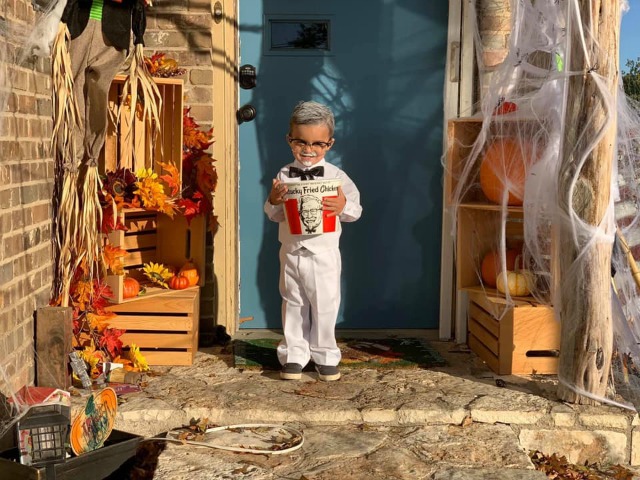 The same Hollie that made the Colonel Sanders costume above created this Dumb and Dumb costume with a combination of store bought and DIY. She made the Mutt Cutts van out of a giant stuffed teddy bear purchased from Costco. She wrapped the cozy coupe car in the fur form the teddy bear and secured with a hot glue gun. Impressive! 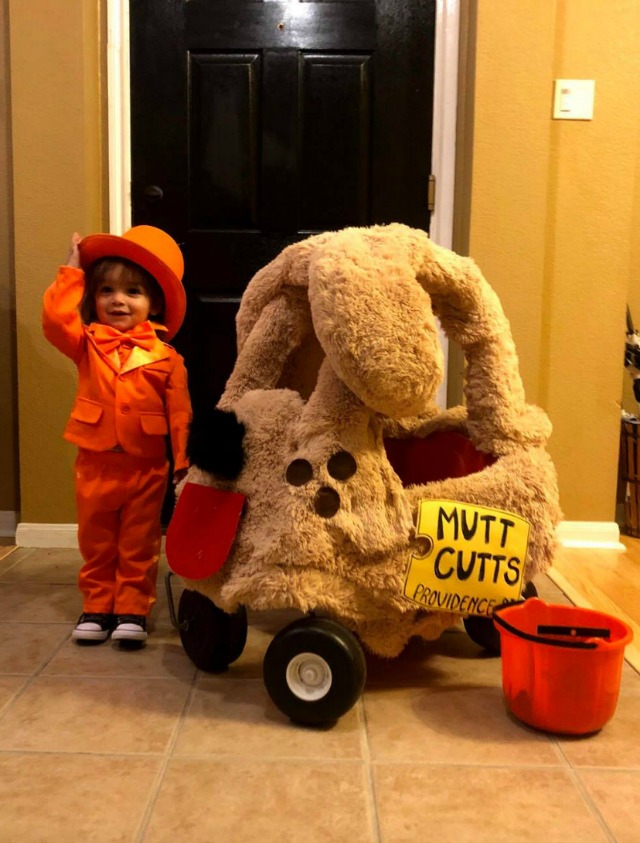 My highschool friend Meredith and her twin sister, Megan, have 7 kids combined. They also happen to be DIY costume geniuses! I shared 3 of their group costumes in the Halloween costumes 2018 edition. This year they turned their cute clan into Max, The Grinch, Cindy Lou Who, Mayor August Maywho and his assistant, Whobris, Lou Lou Who, and the Grinch’s heart. Adorable! 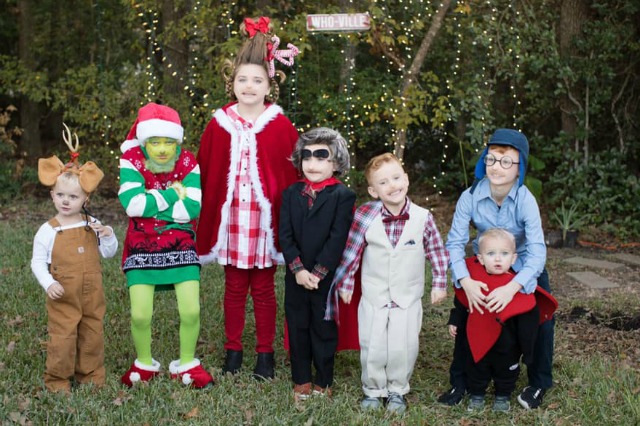 The best DIY adult costumes of 2019

My real life bestie and her sweet husband are expecting a baby and their announcement was perfect! They bought shark onesies and added the “Mom”, “Dad” and “Baby” to the front with stickers. Congratulations, y’all! 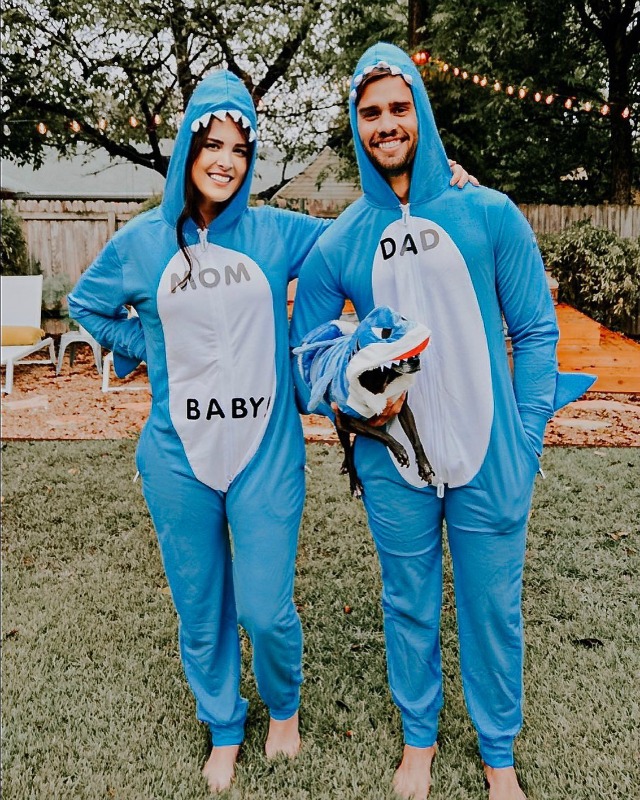 Rachel is the queen of thrift store shopping, she even has an etsy store called Archaic Emporium where she sells vintage home decor.  It’s no surprise that she whipped up these amazing Bert and Mary Popping costume DIY. Here’s what Rachel said about the DIY Mary Poppins costumes:

A lot of the clothing pieces we actually already had in our closets. The rest of the stuff I found either at garage sales or resale stores. I made the chimney sweep out of floral foam, a dowel and skewers and spray painted them black. 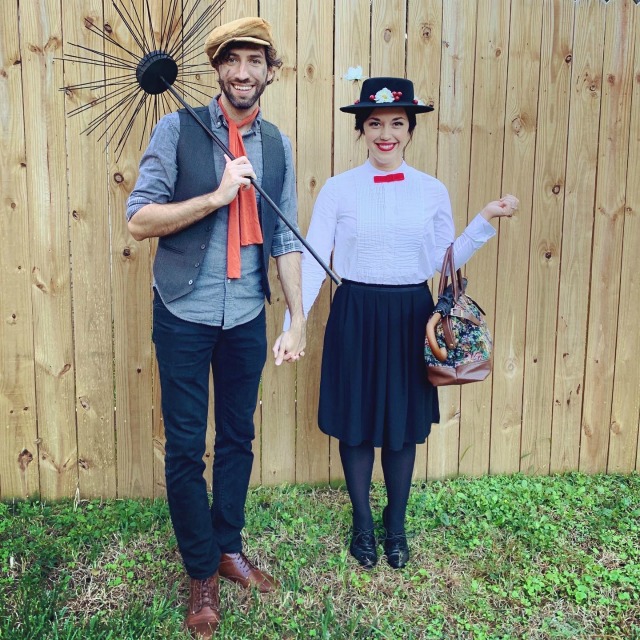 My highschool friend, Cammy, turned her family of 6 into the Mary Poppins crew. Complete with Mary Poppins, 4 chimney sweeps and a tiny, bow tied penguin from the 1964 version of Mary Poppins! 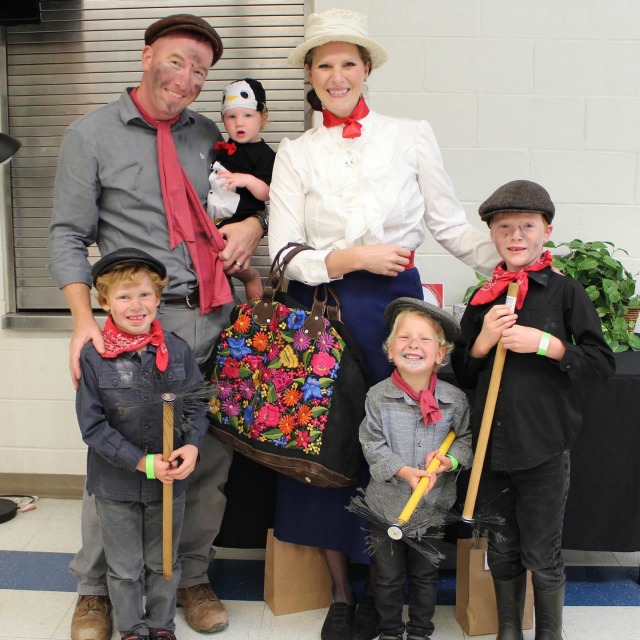 Jesse is an Austin blog friend turned real life friend that writes a lifestyle site called Jesse Coulter. How perfect is her Post Malone costume? She added fake tattoos, a grill, cigarette behind her ear, and carried a Bud Light. Simple and genius! 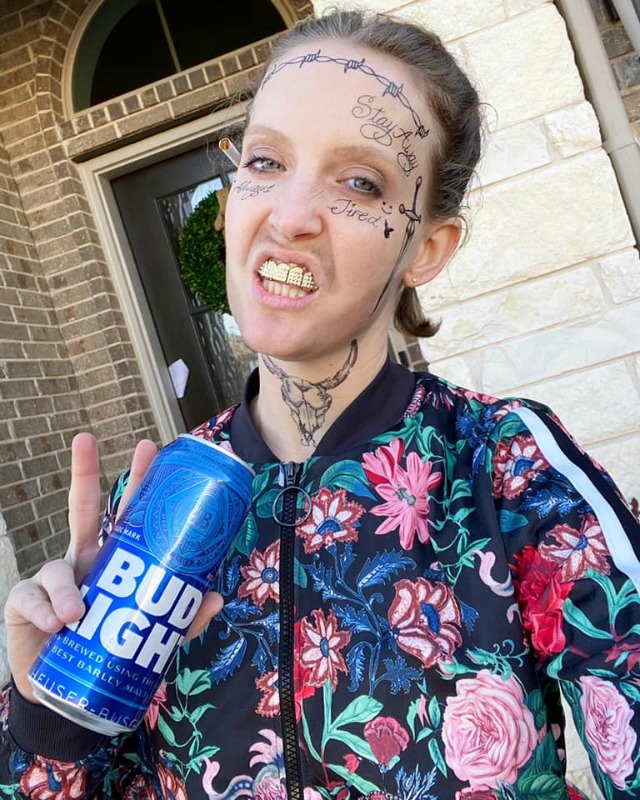 My brother got married last summer, so the Mr. and Mrs. Smith costume could not be more fitting for him and my sweet sister in law, Maddie! Not to mention, their real last name is Smith! 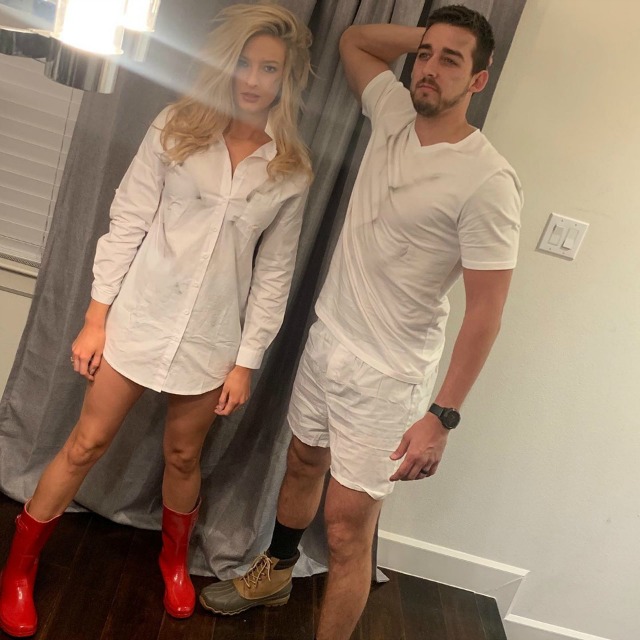 Julia is a long time blog friend and etsy shop owner who is pregnant with her first baby. She is an amazing quilter and seamstress and I always love her DIY costumes. She whipped up a pregnant avocado costume and paired it with a DIY taco and puppy bacon strip. Congratulations, Julia! 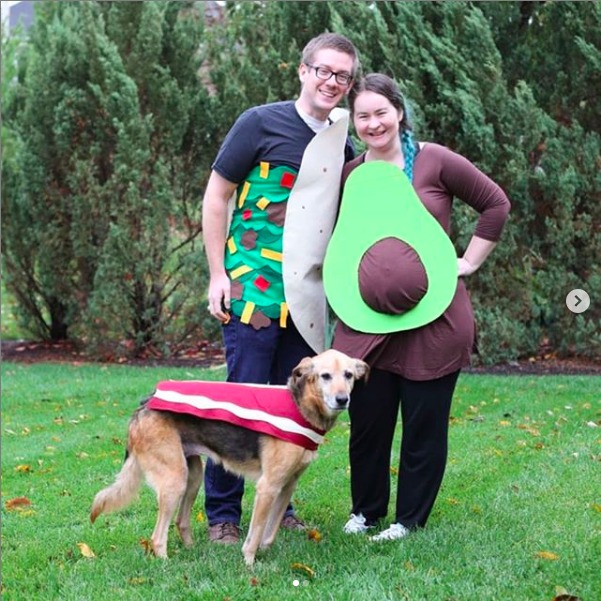 If you live in Austin, I know you get this genius of this Halloween costume! They even made their own t-shirts that say “Happily Eats Bread”. High five to hyper local, super creative costumes! 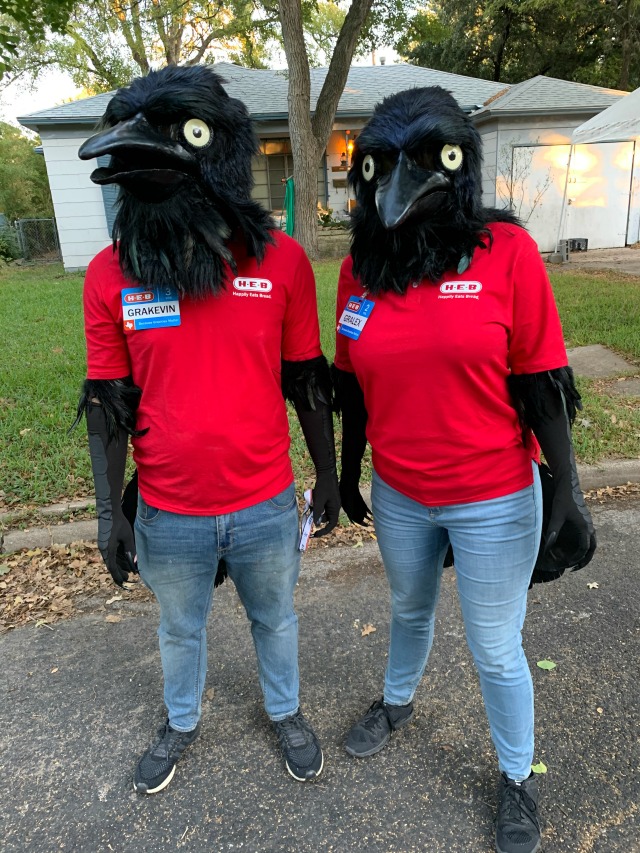 If you want to see more DIY costume cuteness from my creative friends, check out these posts from Halloween’s past: